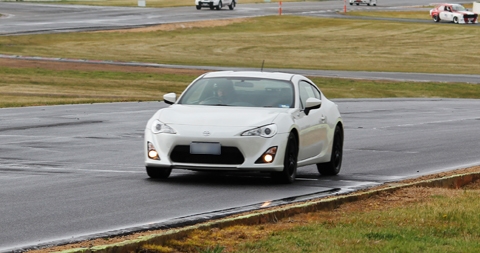 Bendigo-based Pedders Racing is set to become the first team in the world to enter the new Toyota 86 sports car in a national manufacturers’ championship for circuit racing.

As 2011 and 2012 Class E winners in the production-car championship, Pedders Racing will step up to Class D with the lively and accessible dynamic performance offer by the naturally aspirated 86.

Mr Phillips said he had been keen to race the 86 ever since it first broke cover as a concept car at the 2009 Tokyo Motor Show.

“Right from the start, I felt the 86 would be a brilliant car to steer with its free-revving boxer engine, compact design, light weight and low centre of gravity,” Mr Phillips said.

“We expect to run at the front of our class and have a damn good crack at winning straight out of the box,” he said. “We expect the car’s performance and overall balance to be more than competitive, supported by Toyota’s famed reliability and an excellent team that has demonstrated its expertise in championship racing.

Mr Phillips said the 86 had already made a name for itself in motorsport by competing successfully in the Nürburgring and BritCar 24-hour races, the Winton Motor Raceway Sprint Series and the Toyota Sprint Series in the U.K. “We are excited and proud to be the first team in the world to enter the 86 in a circuit-based national manufacturers’ championship series,” he said.

The race car will be built over the summer with its first testing scheduled for February ahead of the series opening round in late March.

Team co-driver and Bendigo business owner Andrew Turpie (J & A Light Freight) said the partners would help ensure preparation of a high-quality race car that would stay ahead of the pack.

“We can’t wait to be racing on the world’s best performance tyre in a car that is produced by the world’s number one car company,” Mr Turpie said.

“I am very impressed at how track-friendly the 86 is and I can’t wait to see the finished product ready to debut in the AMC next year,” he said.

To keep up to date with the Pedders Racing team, head to www.cvmotorsport.net or check them out on Facebook and Twitter.