The History of Pedders 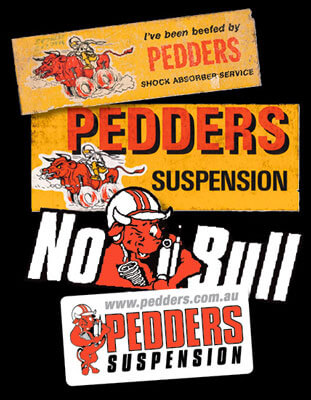 The Pedders organisation began back in 1950 when owner, Roy Pedder, opened Pedders Die-Cast Welding Service in Hawthorn Road, Carnegie, and soon after, moved to Claremont Ave, Malvern. Roy, an ex-RAAF World War 2 plane welder, began the business by fixing general household items, but with his skills in welding die-cast materials, found his niche in the automotive market in smash repairs and shock absorbers.

With the weakness of the early lever-type shocks in Australian conditions, coupled with the demand for his services in this area, Roy decided to specialise in the repair and reconditioning of shock absorbers and subsequently the business grew rapidly. The workshop was moved to a factory in Wren Road, Moorabbin, while sales continued in Malvern. In the mid-50s, Pedder’s became renowned for reconditioning shock absorbers that the rest of the trade said were unrepairable. By the late 50s, Pedders had 15 people servicing more than 3000 shocks per month.

Pedders moved with demand and its reconditioning work gained wide acceptance. In 1964 Pedders was literally mass producing its own brand of shocks by simply modifying overseas designs to suit local needs. The Pedders shocks featured altered internal valve rates based on specific market needs and these new shocks were marketed for the first time under the Pedders banner. Soon the shocks took on the striking red colour for better identification and by the end of the 60s, Pedders shock absorbers had grown in reputation and popularity. 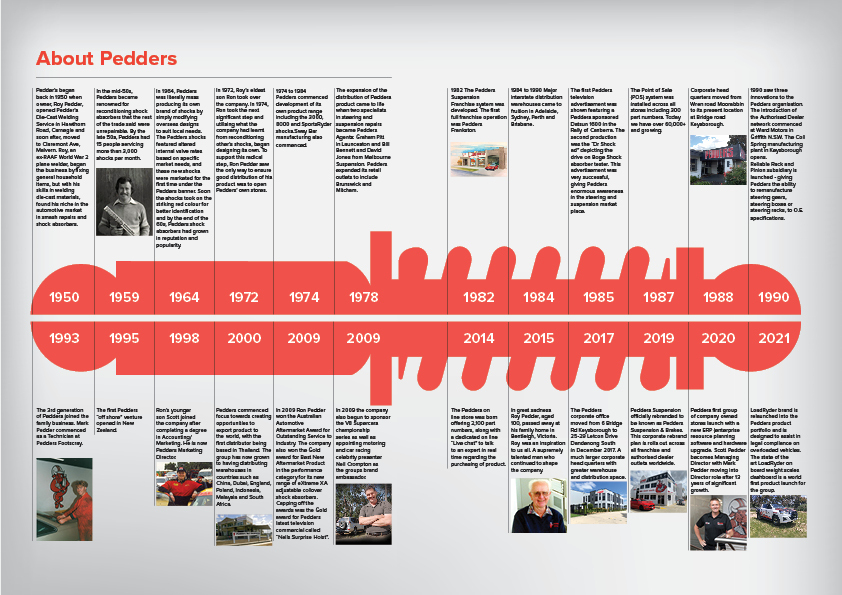 In 1972, Roy’s eldest son Ron, took over the company. In 1974, Ron took the next significant step and utilising what the company had learnt from reconditioning others shocks and began designing its own. To support this radical step, Ron Pedder saw the only way to ensure good distribution of his product was to open Pedders’ own stores. This strategy paved the way for the commencement of aggressive franchising to support Pedders’ own homegrown brand. This move made Pedders unique worldwide in that it developed, manufactured, distributed and installed its own product through its own retail chain.

From 2006 to 2019 Mark Pedder, Ron Pedder’s eldest son was Managing Director. During this period of incredible growth, Pedders export business expanded into more countries abroad including the USA and the extremely successful and innovative Pedders GVM+ program and the Pedders Weight Matrix were developed. In 2019 Scott Pedder, Mark’s younger brother, became Managing Director. Mark continues as Director with a core focus on the Sales and Operations of the Group. Mark is also the Chairman of the Australian Automotive Aftermarket Association. Scott’s core focus as Managing Director is on business strategy and discipline. Scott, who has a bachelor of commerce (majoring in marketing), started his career at Pedders within the marketing department and remains very involved in developing and nurturing the unique Brand and Culture of Pedders.

Pedders now has over 120 locations Australia wide, most of which are franchised. Pedders has recently expanded its export markets to now include shipments to distributors in Korea, Mauritius, Europe, The Middle East, Thailand, Indonesia, Kenya, South Africa, Malaysia, China, Cyprus & the U.S.A. Pedders employs over 500 people Australia-wide and has suspension products for the majority of vehicles on our roads today. This large, multinational automotive company has come a long way from a backyard welding shop, and most if not all of this growth has been due to the determination, dedication and foresight of our most important asset – our people.