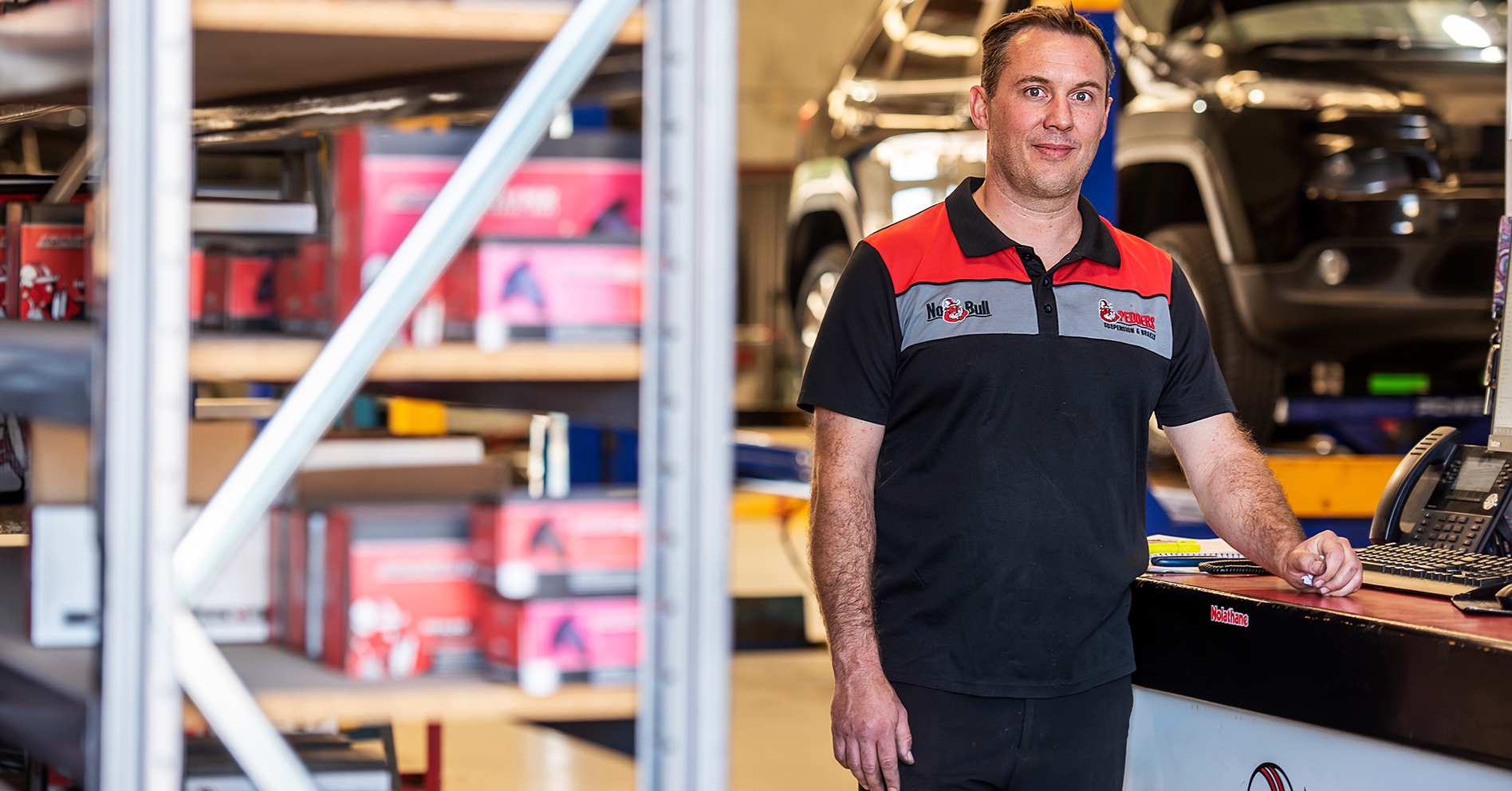 From Technician to State Manager and owning two successful Pedders stores – Dominic Trim has had a rewarding career with Pedders!

The Pedders People that make up the wider Pedders Suspension & Brakes Group have some incredible stories to tell. Many of them are veterans not only of the automotive industry, but also the Pedders business itself, and over the years they have built rewarding careers, and successful businesses as franchise owners.

Dominic Trim has been with Pedders for over 20 years and started out as a Technician, then went on to manage multiple Pedders stores in WA, before transitioning to State Manager. Dominic found he missed the workshop environment and being on the tools, so he became a Pedders Franchise Owner by taking over Pedders Joondalup, and turning it into one of the group’s most successful stores. Having successfully owned one store, he went on to purchase a second franchise at the Osborne Park store in WA. 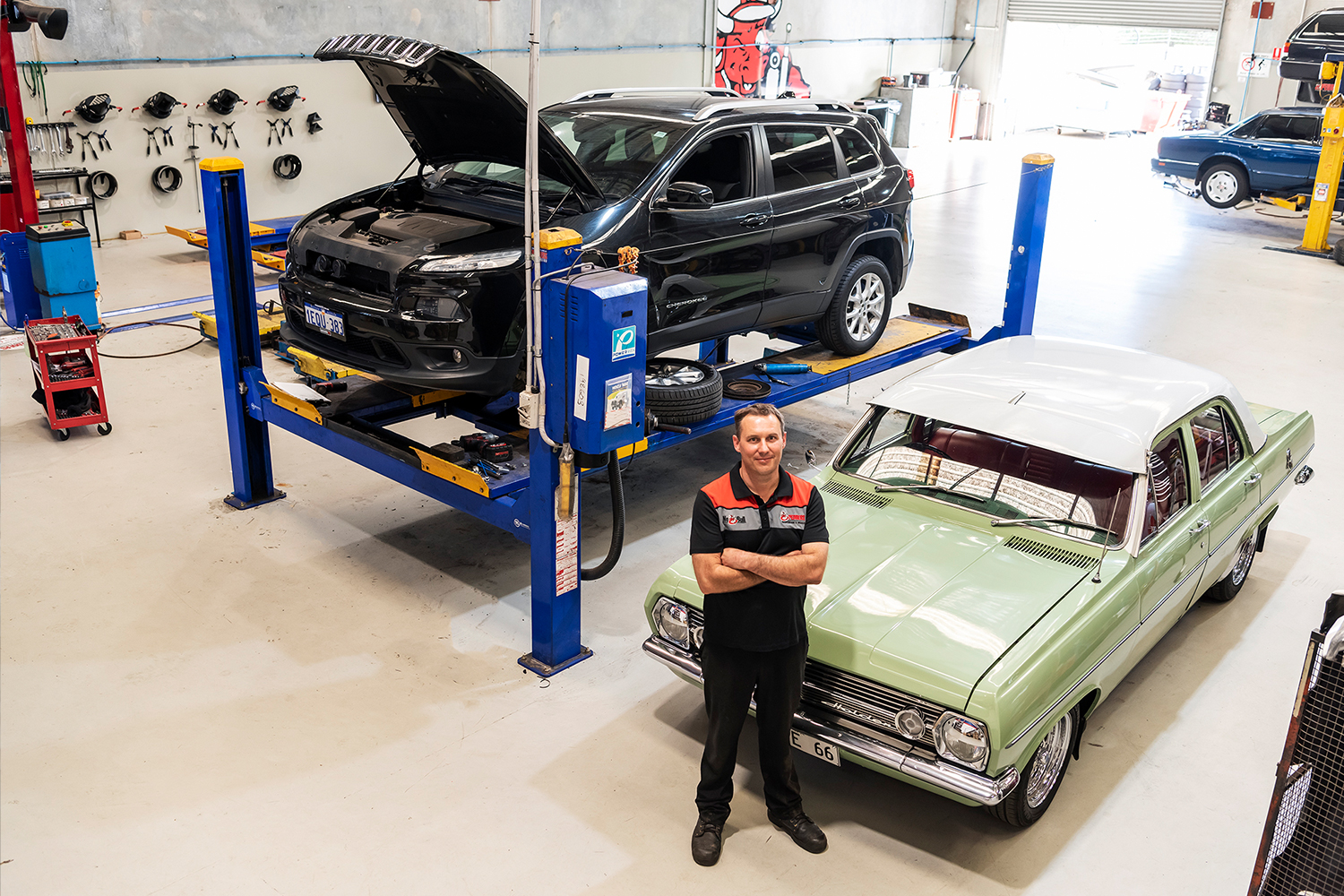 How did you start with Pedders and what was your role?

I originally started at Pedders by filling in for a couple of weeks at a Pedders Franchise store in Perth. I’m a mechanic by trade and I was in between jobs at the time so I filled in for a couple of weeks before starting another job. The owner of that Pedders store actually called me back in for a full-time Technician role so I accepted it and remained at the store. That was about 21 years ago now!

I then went on to purchase the Joondalup franchise, and a few years later we purchased Osborne Park as well. Funnily enough I worked at both of those stores as a Store Manager before going onto State Manager and Franchise Owner. 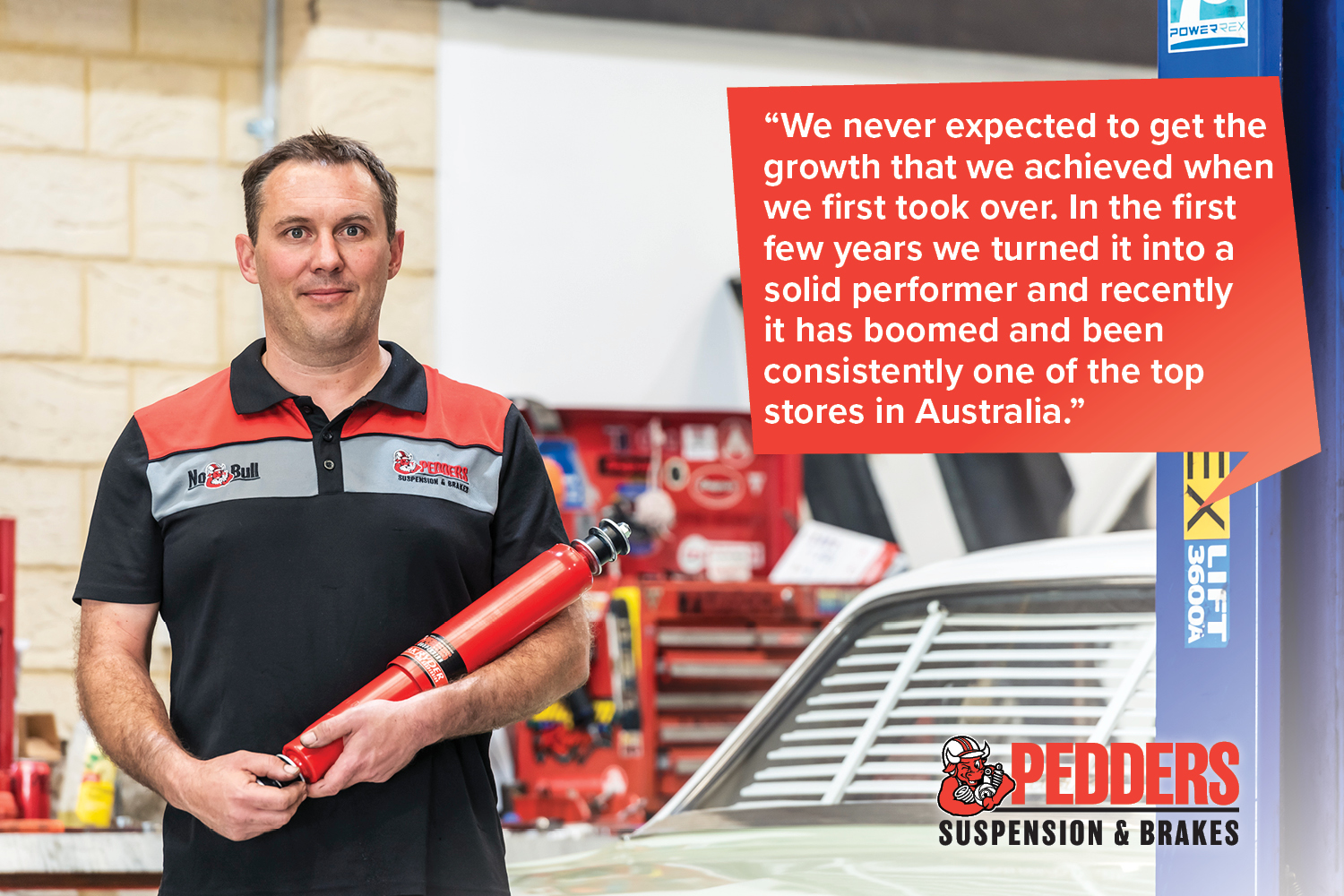 What made you want to become a Pedders franchise owner?

After being State Manager for a while I felt like managing the stores and being on the tools was more suited to me. Around 2012 the then franchise owner of Joondalup wanted to sell the business, and I saw moving into that store as the next logical step, so my partner Annie and I took it over.

We never expected to get the growth that we achieved when we first took over. In the first few years we turned it into a solid performer and recently it has boomed and been consistently one of the top stores in Australia. We moved to a bigger building about two years ago because the original site became too small.

A few years later we thought about what could be next for us as we did well at running one store, we had a chat with Mark Pedder about Osborne Park as it was a company owned store at the time and we ended up buying it and taking over a couple of months later.

Now we’ve owned Joondalup for about eleven years and Osborne Park for around three years. 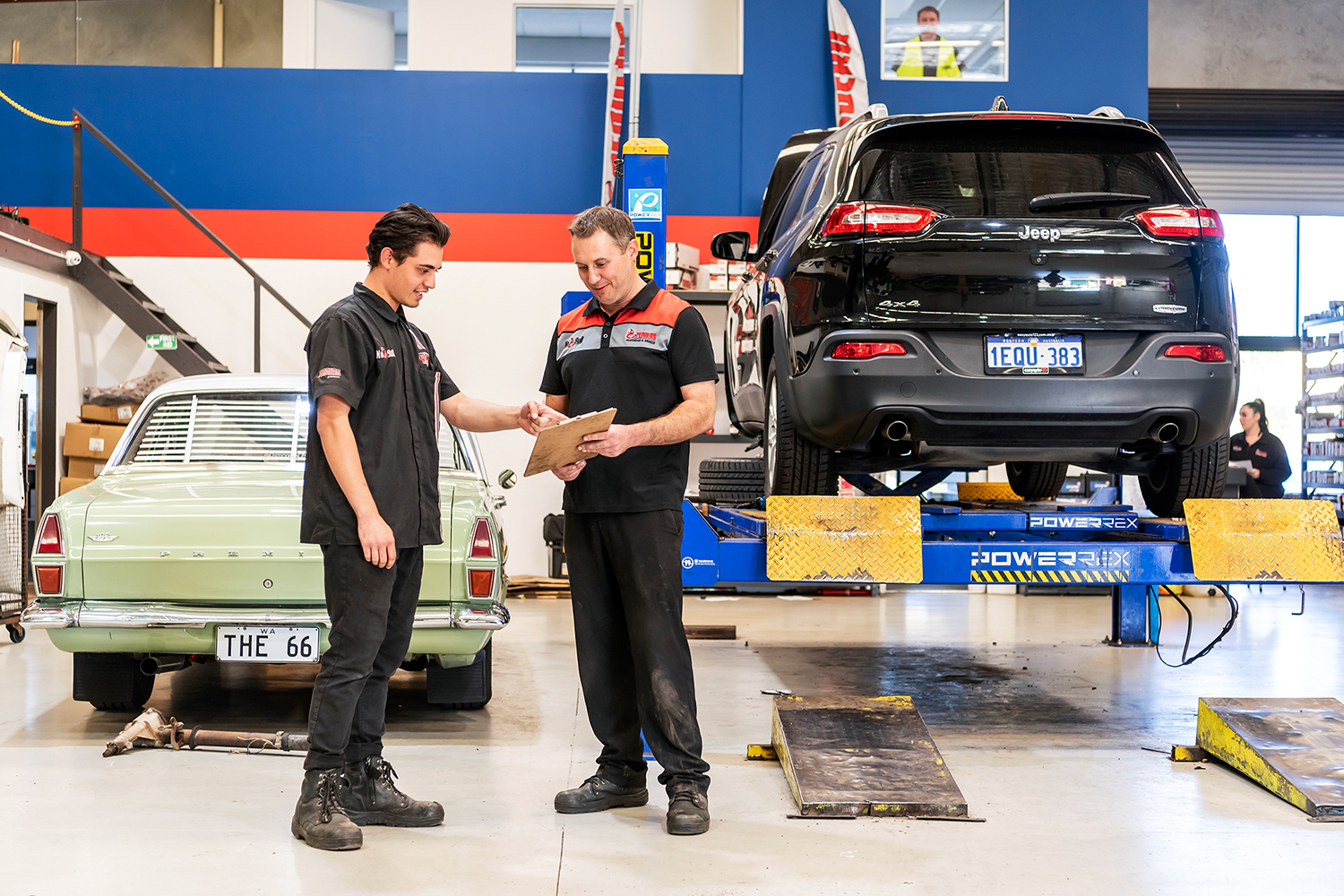 Why do you think your stores have been so successful?

At the end of the day, it’s the people that make any business a success. We’ve had really good people in the team and we’ve been motivated to do a good job, and that’s led to us having a really strong customer base. Trade is also very confident with us so we have a solid Trade customer group. Whether it’s Trade or Retail we get a lot of referrals from our customers because they have had a good experience with us and they continue to come back.

My partner Annie and I are both really involved in the business every day, I like to refer to Annie as the Business Manager – she does everything! She does training of the staff, she answers phones, arranges bookings, basically anything outside of the workshop she manages. She’s been a crucial part of the success of the business, and we couldn’t have done it without her. 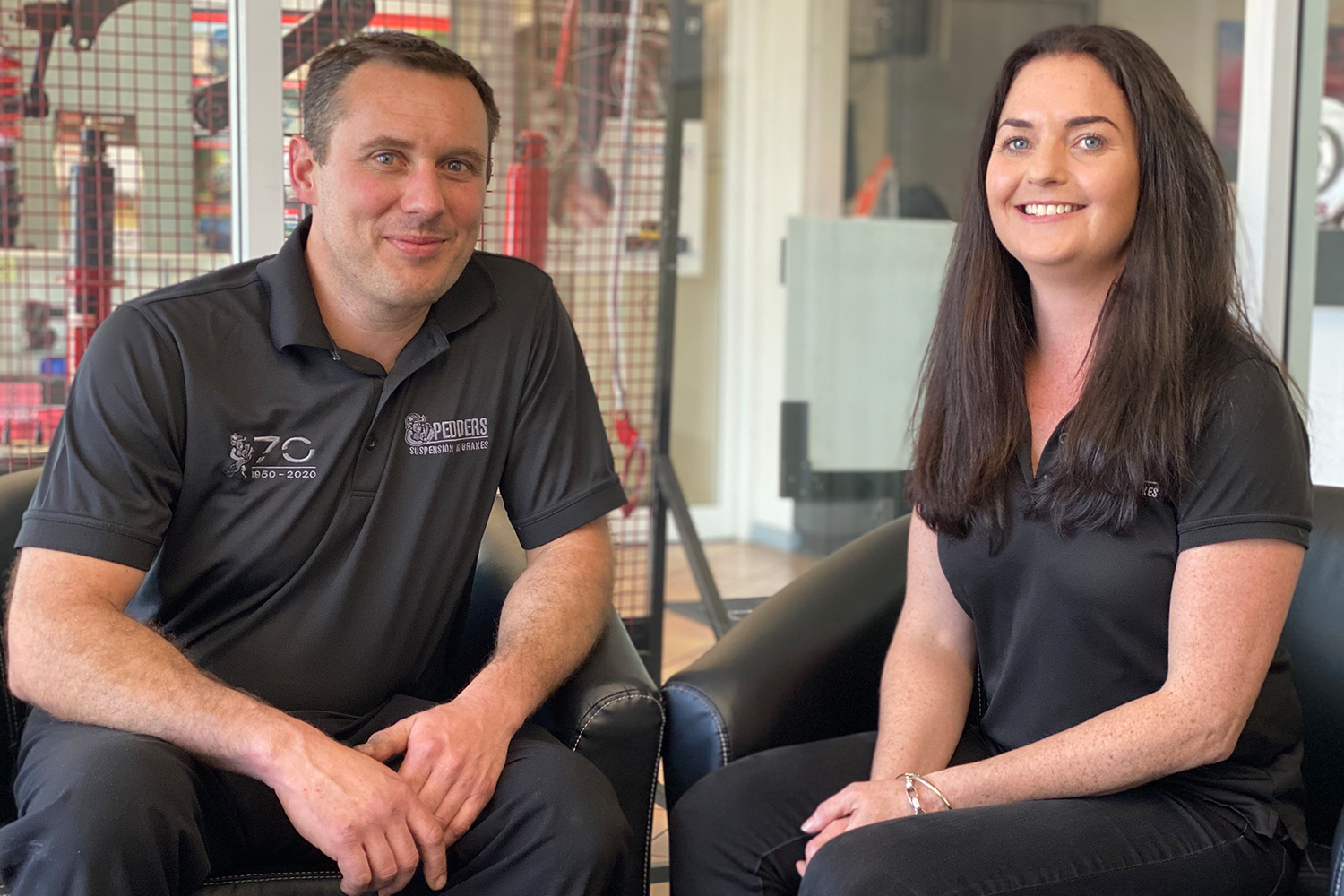 What’s something you’ve achieved that you’re proud of?

We’ve won quite a few awards over the years, including the Roy Pedder award in 2017, so there are definitely some proud moments there. But I would say I’m most proud of what Annie and I have achieved together, and how far we’ve come within the company with the support of Pedders over the years – it is phenomenal. I think our story is what I’m most proud of. 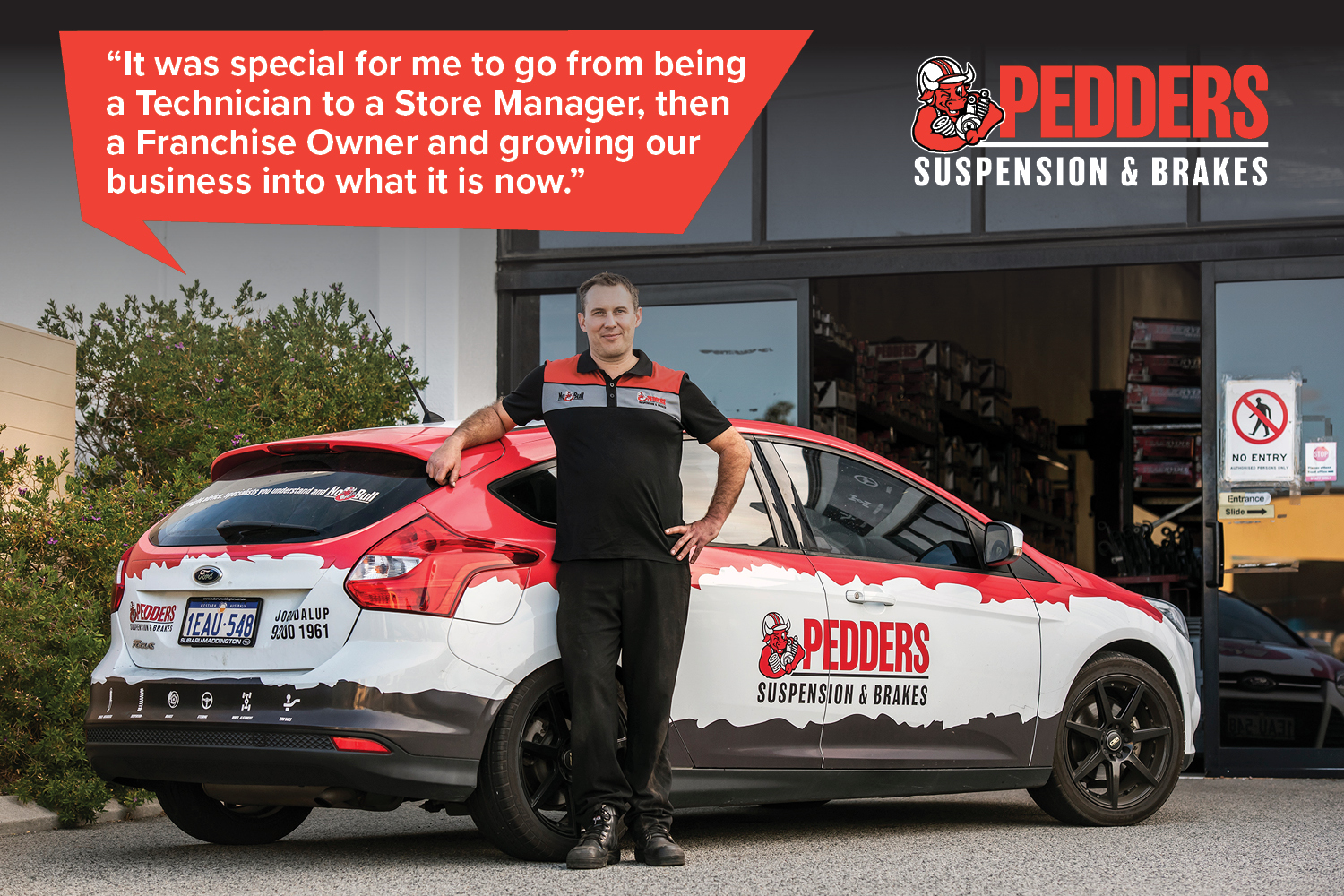 What has been your best Pedders memory?

There’s been quite a few great memories over the 21 years that I’ve worked with Pedders, but one that stands out was winning the Roy Pedder Award in 2017. It was special for me to go from being a Technician to a Store Manager, then a Franchise Owner and growing our business into what it is now. To be recognised with those awards is quite a special feeling. But ultimately, it’s not all about awards, it’s about running a business and doing that to the best of your ability and the satisfaction that comes with it.

I have some fantastic memories with a lot of great people at Pedders, in particular Dave Fahey who I’ve known since the very beginning, he was a mentor for me particularly in the earlier years – a lot of my success I can attribute to those mentors within the group. 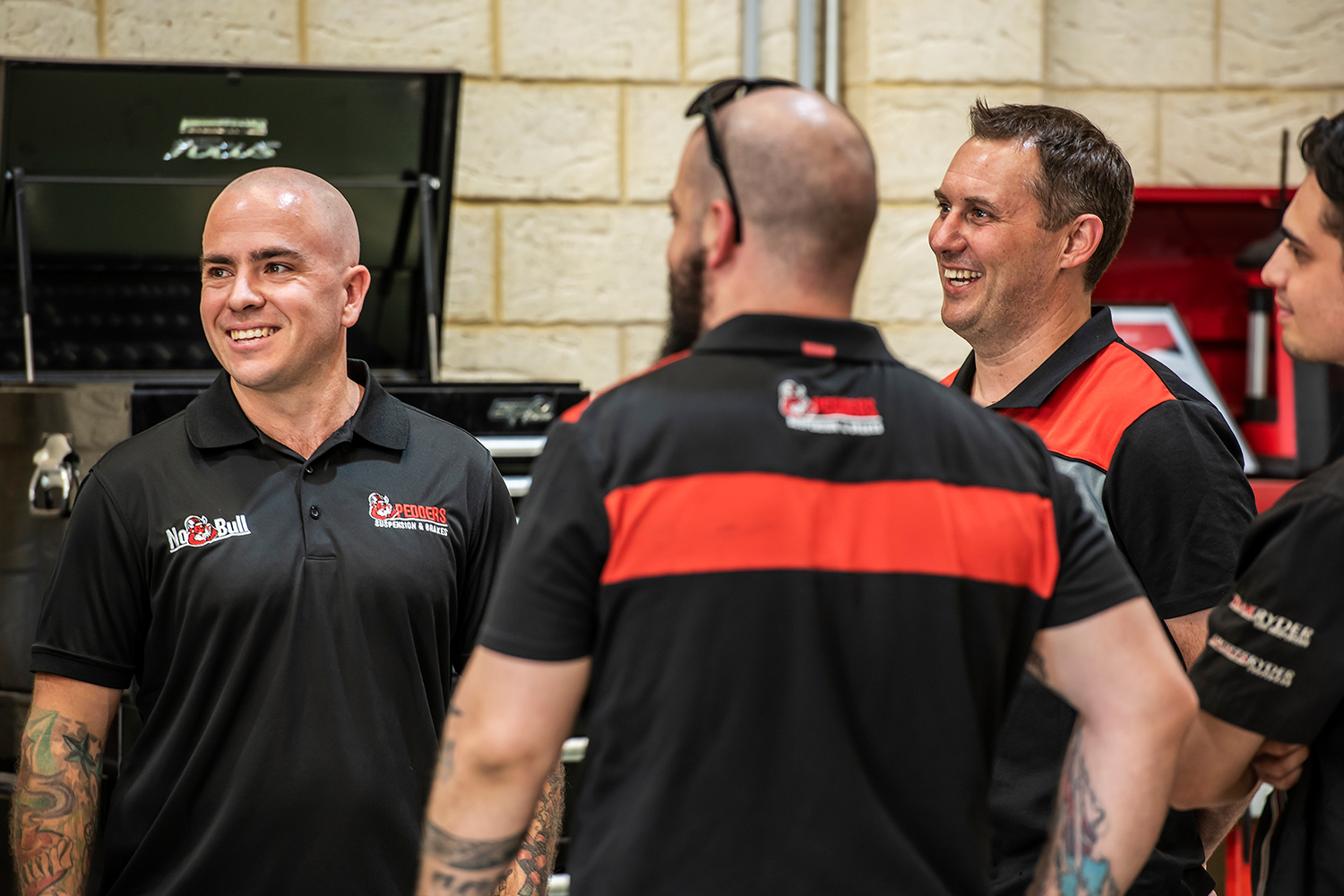 How have mentors helped you succeed at Pedders?

I might not be here if it wasn’t for Dave Fahey who has really been a mentor for me throughout my entire career at Pedders. I met Dave many years ago when I was a second-year apprentice at a service station workshop – he was the foreman. I actually got the two weeks fill-in work at Pedders via Dave as he had taken up a role at Pedders in WA by that time. That ultimately started by career at Pedders!

There were a few other managers that I worked with over the years as well that really helped me to develop and ultimately succeed in my career with Pedders. It’s been an exciting and rewarding journey with Pedders over the years and I’m fortunate and proud to be part of this great Australian business.

Interested in a rewarding career in the automotive industry that can take you places? Visit our Careers website today!