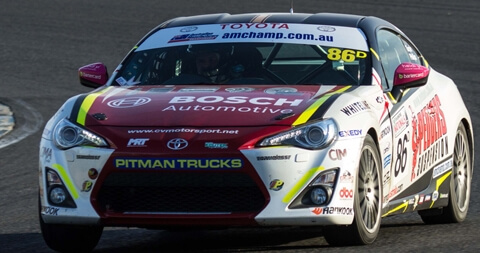 Having taken on the enthusiastic project to build and race the world’s first production specification Toyota 86, Bendigo’s Pedders Racing team’s future was secured in the days leading up to the second round of the Australian Manufacturers Championship (AMC), the world’s first production racing Toyota 86 homologation papers finally arriving to team headquarters at Pedders Bendigo, an envelope that the team and their strong group of followers hoped would signal the true start of a strong on track future.

After a challenging debut weekend at the opening round of the AMC at Phillip Island, the #86 underwent a complete livery makeover to add eye-catching glamour to the already keenly watched Toyota. The volunteer crew would return to their daily lives in the regional centre, returning to team headquarters after hours to ensure the Pedders Racing entry would be at its best for the Sydney Motorsport Park performance ahead. Work included replacing the standard exhaust system maniverter to bring it to specification with the Nameless racing exhaust system; the dash was removed and the wiring systems checked and cleaned, the air conditioning pump was removed to lighten the engine bay componentry; and a full spanner check revealed a reliable and strong setup for the still new racing machine.

To read the rest of this article please download the pdf below.