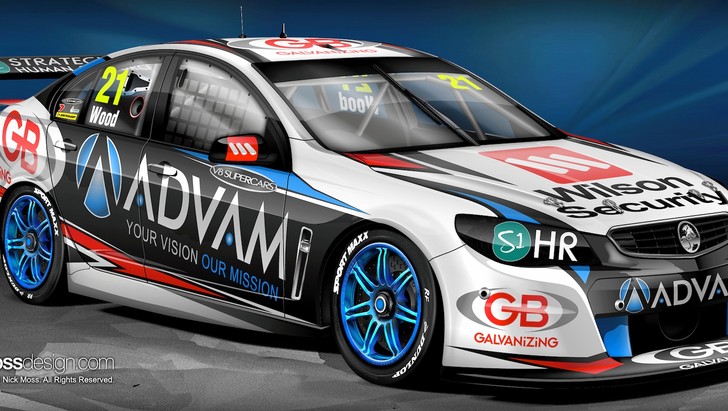 The first of the Brad Jones Racing VF Commodore’s liveries has been released, an artist’s impression showing the 2014 scheme of the #21.

Earlier this week it was announced 2013 Dunlop Series winner Dale Wood would steer the car, after David Wall’s departure to Dick Johnson Racing.

And now fans can picture what the blue, black and white Commodore will look like on the race track – to be seen in the flesh at the Sydney.com Test Day on February 15.

Wood is thrilled to have been elevated to the main series for 2014 and loves the look of his new drive.

“I think the car looks awesome and will be a great on track representation of our key partners in ADVAM, GB Galvanizing, Wilson Security and Strategy One,” he said.

“Now the team and I need to make sure that it goes as good as it looks. The BJR cars were very strong last year and they have a great in-house engineering team who have been working hard in the very brief break to make sure that they maintain the front running pace.”

ADVAM CEO Jose Da Silva was pleased the first race of the season, the Clipsal 500, was staged in the hometown of the company.

“ADVAM is Adelaide based and its fantastic to have a brand new livery and launch it at its very first race in our home town, in front of our customers and staff,” Da Silva said.

According to the team, there will be changes to the livery throughout the season to coincide with key commericial announcements and product launches.

“The companies associated with my car have a history of leveraging their involvement in motorsport to genuinely integrate with their business plans and a number of the key sponsors have some significant activations plans around their businesses and this branding for 2014,” Wood said.

See the 2014 V8 Supercars on-track for the first time at the Sydney.com Test Day at Sydney Motorsport Park on February 15. Season opener, the Clipsal 500, follows from February 27 to March 2, with tickets available now.