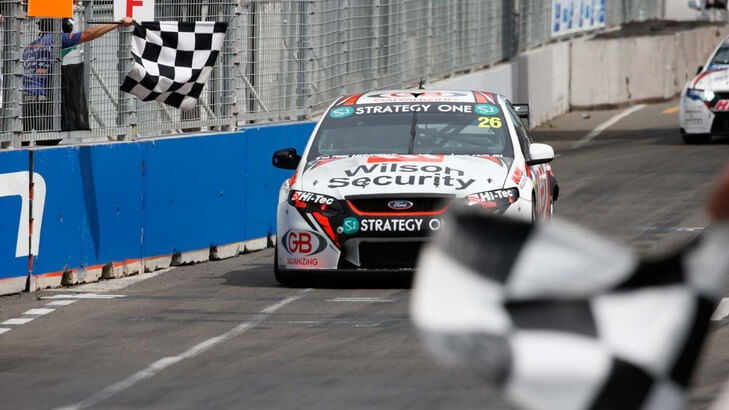 Dale Wood may be new to the Brad Jones Racing stable, but for long-time V8 Supercars fans, he is a familiar face.

Before winning the 2013 Dunlop Series, and being a standout co-driver at last year’s Sandown 500, he had a short stint in the main game in 2009.

Wood knows just how big a task competing against Australia’s motor racing elite will be – but the Dunlop Series trophy in the cabinet fuels his confidence.

“I feel like I’ve done enough to say I’m worthy of the main game,” the 30-year old told v8supercars.com.au.

“I just feel like I’m in a far better position now with the people I’ve got around me.

“At the time (in 2009), there was some really tough stuff in my family – without going into detail, there were some really ordinary things going on that affected me a lot. All round, it was just a really bad time for me and I think having such a short run in it, doing only the four or five runs I did, I wasn’t happy away from the track, so it was really hard to be happy at the track.

“Now I just feel like everything’s good. I’ve got a great business behind me, my wife, a little boy; things are going really well. So if I can take the position I’m in away from the track to the track and carry the momentum I built up last year in the development series – I can’t see why I’m not in the best position I’ve ever been in.”

Getting back into the top tier has been a long-term goal for Wood. Taking it step by step, he decided spending 2013 in the Dunlop Series was the best way to get noticed.

“I thought, I’d love to get in the main game, but it was going to be more beneficial for me to do a year in a good team, having a crack at that Development Series title and hopefully putting that to my name, will give me a bit more credibility.”

And his plan worked – despite settling at BJR, he spoke to other teams, but had the feeling BJR was the place.

“We spoke to a few teams – the usual candidates, all the teams available – but the whole time I thought BJR, for some reason it was in my gut.

“In a sense, everything I’ve done team-wise has always been family orientated, and I like that feel. That side of the team really appeals to me.

“Also the fact they did really well last year. They got a grip on the new cars and did a bloody good job with them … So when it was around New Year’s Eve, just after I got the call or text message to say that it was all on, all happening – it was a pretty good time of year!”

While he believes he deserves a spot on the 2014 grid, Wood was not at all cocky about his ability or expectations. He knows the intensity will be high and it will take time to settle in.

Because he has competed in more than two V8 Supercar events in previous years, in addition to being a co-driver, he is not classified as a rookie in 2014.

“I know there’s a few areas of my driving performance I really need to pick up on,” Wood said.

“I don’t know my qualifying ability is where I need it to be at the moment. I had a great run last year qualifying but I know the intensity is quite a lot higher in the main game.

“There’s a few key areas I need to work on and I’m doing everything I can in my training and with the simulator work.

“I don’t expect things to be easy from the get go, but I’d like to think once I’m comfortable and happy in the car and the environment, that I can learn from Fabian and Brighty and start looking at some good results.

“Realistically any top 10s, things like that, are going to be great results.”

The livery for the #21 Holden Commodore VF was released on Friday.

The Sydney.com Test Day is the first time in 2014 the V8 Supercars will appear on the track, and is free for fans on February 15 at Sydney Motorsport Park.