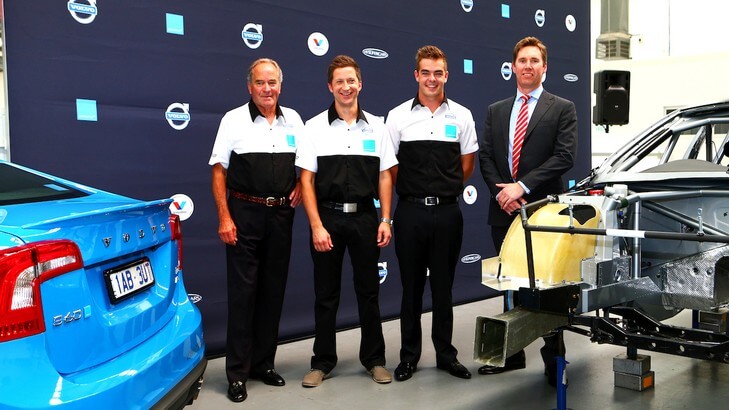 Garry Rogers is renowned for unearthing talented youngsters – so why international import Robert Dahlgren for the second Volvo seat?

Roger told v8supercars.com.au he felt he needed a mature driver to work with young teammate Scott McLaughlin; and the 34-year-old Swede fits the bill.

“My concern about having a young bloke straight away was the fact that Scott is still a young guy,” Rogers said.

“Scott’s a great driver and he’s a very mature thinker – but I’m just not sure I need two 20-year-olds together, so I thought perhaps an older, more mature head might be a reasonable thing to do – so I did it.”

Much speculation surrounded the second seat at the team, which is transforming to factory-backed Volvo Polestar Racing for this coming season. It was confirmed yesterday Valvoline would run as the 2014 naming rights sponsor, so the team will be known as Valvoline Racing GRM.

McLaughlin was announced mid-way through the year as Volvo’s first official V8 Supercars driver, but his teammate Alex Premat was not part of the presentation, leaving big question marks over the Frenchman’s future in the sport.

However, given the team’s amalgamation with Volvo Polestar, it was also suggested a Swedish driver was on the cards.

Rogers explained how it played out.

“We were looking at drivers, including Alex (Premat) – Alex was still in our equation,” he began.

“Alex did a great job other than (he) did have finishing problems, which were a bit of a concern for myself and the team, and so we were just looking around.

“My initial thought process was another young guy – because that’s what I do and I like to do – and I’m sort of still sussing that as we move along. But Robert, I met at the (Volvo S60 road car) release, and I’d spoken to a couple of guys in Europe – two in the US who I knew, knew him, and they said he was ok – and it just rolled on from there.

“We had ongoing discussions and then when myself and the boys went to Sweden (in August) we met him and had a chat.

Rogers said Volvo was keen for him to look at European drivers, not necessarily from Sweden.

While Dahlgren is touted as being a good development driver, that was not part of the equation for Rogers.

The colourful team owner would not give away his secret to spotting raw talent.

“If I tell you that you’ll go and tell all the team owners and I won’t be as smart as I think I am!” he said.

But he did offer, as always, some words of wisdom:

“If I see that a person has those and wants to work as part of our team rather as one part of our team – you have to be part of our whole team or don’t turn up here. That’s what I do. If people don’t like that, they don’t have to come here and don’t’ have to work for me.”

A Volvo S60 ran last week with the B8444S engine and Rogers is pleased with the team’s progress developing the new cars.