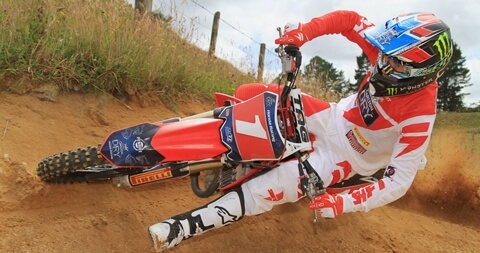 Carlton Dry Honda Racing’s Ben Townley is ramping up his preparation for the opening round of the 2013 MX Nationals.

The former world champion has been working on his overall fitness over the past few weeks, after a successful off-season operation to plate his collarbone following a testing crash last month.

Townley, who won the Woodville GP in January, will be back on the bike to conclude testing within the next 10 days and is looking forward to the opening round of the MX Nationals.

“I crashed while testing and broke my collarbone so in order to ensure it is fully healed for the start of the MX Nationals it has been plated,” Towley explained.

“While it is not ideal, I feel that up until that point I had done a lot of riding including racing the Woodville GP and opening round of the NZ MX Nationals.

“I have been training twice as hard off the bike and look forward to concluding our testing program in the next fortnight.

“I want to say a big thank you to Simon Maas from Racesafe for arranging everything for me yet again,” Townley added.

The opening round of the MX Nationals will be held at Raymond Terrace on Sunday April 14.