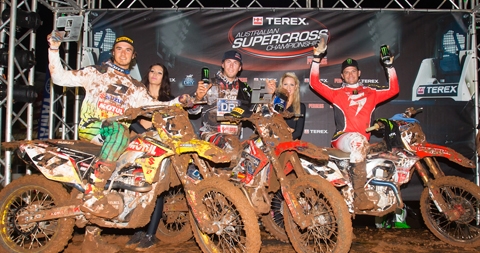 Carlton Dry Honda Thor Racing’s Ben Townley has made a triumphant return to the podium, relishing Toowoomba’s wet conditions to finish second at the penultimate round of the Terex Australian Supercross Championships last night.

The former World Champion, who was eighth off the start in the final, moved to sixth on the opening lap.  He gained another four spots over the next two laps before falling victim to the treacherous conditions.

Back into second on Lap 6 of the 15-lap duel, Townley set some of the fastest laps of the race as he set after race leader Chad Reed.

Townley finished the race second, to claim his first Supercross podium of the year and moves to ninth in the Pro Open championship standings.

“I love these conditions,” Townley said. “I grew up racing on tracks like this so tonight was great for me.

“It was awesome to be back up on the podium. It has been a long time since Conondale and with the focus now on next year’s championships, it is good to know I am heading in the right direction.

“It was crazy out there and I came off a few times. If I had of kept it on two wheels I could of made a really good race of it,” Townley concluded.

Teammate Gavin Faith endured a tough night in the Lites class. The Honda CRF 250 rider won his heat race but was subsequently disqualified because his transponder fell off.

Faith won the last chance qualifier to progress to the final but was impeded by a poor gate option. The championship leader finished the race third, opting to conserve championship points with one round remaining.

“It wasn’t the best night that’s for sure,” Faith lamented “My transponder fell off in the heat race so I was disqualified and had to race the LCQ.

“After being left with the second last gate pick I didn’t get a good start but managed to get up into third on the opening lap.

“The track was becoming really scetchy so after a while I just sat back and thought about the championship,” Faith said.

Honda Thor Racing’s Under 19’s campaigner Hayden Mellross also endured a tough night. Dropping to 12th after an opening lap crash in his qualifying race Mellross fought hard to claw his way back up the order, eventually finishing fifth.

Mellross made a slow start to the 10-lap final but worked his way into second with two laps to go. Pressuring Kyle Makeham for the race lead the Honda rider went down on the final lap allowing Makeham to hold onto the lead.

Mellross retains the U’19’s red plate and will take an 11-point lead into next weekends final round of the 2012 Terex Australian Supercross Championships at Newcastle Showgrounds.