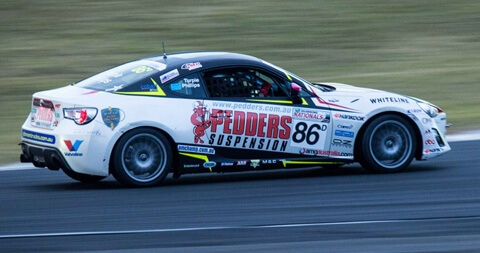 Pedders Racing to complete Winton test ahead of strong season end.
As part of the Pedders Racing team’s preparation for Round 4 of the Australian Manufacturers Championship (AMC, Wakefield Park, 18 – 20 October), the Bendigo crew will head for Winton Raceway this weekend to complete the latest in their string of test sessions, to keep the world’s first national production racing Toyota 86 on the incline of development, aiming to give the local team the best chance at taking out their third consecutive Class Championship in just two event’s time.

The Sunday 29th September test has been scheduled to review the many changes made to the car since its last competitive outing in Queensland back in August, where the team secured another world first, taking out a Class race victory as part of the ‘Fight in the Night’ race under lights, the team also taking the Toyota 86 to the verge of the outright top ten competition, showing strength and reliability of the race package.