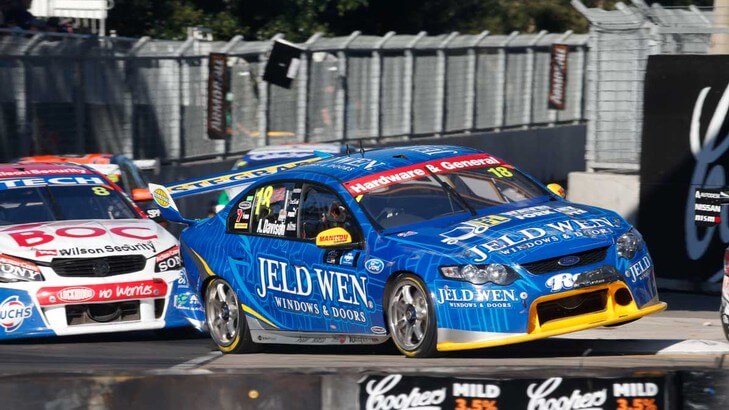 Impressed by the young driver’s performance during the PIRTEK Enduro Cup, Schwerkolt selected Perkins from a pool of potential candidates to fly the Ford flag for his FPR customer team in 2014.

Schwerkolt believes the 27-year-old is ready for a second crack at the main game and is pleased by his enthusiasm to get behind the wheel.

“I looked at all his data from the enduros and he had some promising speed,” the team owner told v8supercars.com.au.

“At some stage he was about the eighth quickest combination there for a while with Scott McLaughlin – I thought, you know what, this guy’s got some ability, I think he deserves another go and I reckon he’s the real deal.”

But no pressure, he says. He plans to assess Perkins’ success slowly.

“I’m not going to put any expectation on him at the moment.

“I know he’s going to try hard – he’s really, really hungry and all he wants to do is get behind that steering wheel and have a go… He’s keen as anything and I’m not putting any expectations on him yet, but I’m fairly confident he will do well.”

The McLaughlin-Perkins pairing generated attention during the three big race meetings last year having finished 10th in the PIRTEK Enduro Cup after the Garry Rogers Motorsport Commodore suffered from electrical gremlins over the Gold Coast weekend.

That weekend, however, was a good one for David Reynolds, who broke through for a victory in his Bottle-O Falcon – making the JELD-WEN Ford the only one of the FPR cars not to secure a win last season.

Is that something on the cards for 2014?

“Certainly a win would be just absolutely fantastic,” Schwerkolt said.

“It’s so close this Championship and everyone’s getting on top of these cars … a win would be absolutely fantastic but just a step at a time – I’m not going to put too much on Jack.

“I know he will be trying hard for that so let’s hope we can get a win… I really hope, fingers crossed that it will be a good year for the Team JELD-WEN.”

Scrutiny surrounded the #18 seat at that stage of the season, with 2013’s Alex Davison only secure at the team for the one year – and not achieving the top 10 standard they had been hoping for.

Davison had a glimpse of success on the podium at the penultimate event at Phillip Island, but it just wasn’t enough. Interestingly, Davison was another driver Schwerkolt gave a second chance, after finding himself without a main game drive in 2012.

“It was a tough call for sure; very, very tough call,” Schwerkolt said of giving Davison the bad news.

“Some of the decisions were out of my control a little bit, but we waited right until the end to make the decision. Obviously Alex had a good run at the end of the season so he did a great job for the team.”

But it’s 2014 that counts now, and Schwerkolt is encouraged by Perkins’ attitude and enthusiasm.

“He’s raring to go. So it’s exciting actually … He’s a great personality, great character, so I’m really hoping it all comes together.”

The Sydney.com Test Day is the first time V8 Supercars will appear on the track, and is free for fans on February 15 at Sydney Motorsport Park.