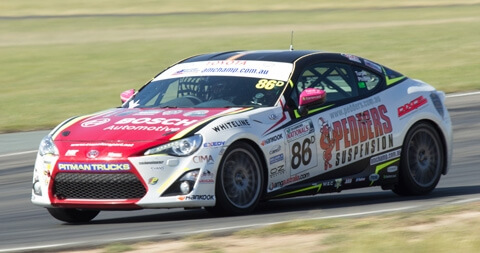 One round remains. One Class Championship hangs in the balance. One local team is ready to create history as Bendigo’s Pedders Racing look ahead with high hopes for a strong season end, a season finale that could add further glory to their already history-making year with the Pedders/Oz Racing Toyota 86 in the Australian Manufacturers Championship.

Currently placed third and fourth in the Class D standings, Andrew Turpie and Grant Phillips are within striking distance of securing their third consecutive Class title in the series, an achievement that would see the Victorian duo create history for Toyota, becoming the world’s first production racing Toyota 86 to take a championship title in a national series. Adding 2013 championship honours to the Pedders Racing team’s achievements of being the first homologated, race debuted, pole-taking and Class race winning production racing specification 86 anywhere in the motor sport world, would be a dream end to a project that has consumed the past three years of this volunteer team’s life.

In order to place the Pedders/Oz Racing 86 with the best chance at this weekend’s final round of the Australian Manufacturers Championship alongside the Shannons Nationals at Sandown Raceway, Motion Performance Exhaust Centre (Bendigo) have re-worked the standard exhaust components to compliment the custom Nameless system, giving the #86 the perfect look of twin pipes, just in time for competitors to enjoy the view from behind this weekend.

The team at ARB Bendigo completed a dyno test this week, confirming the Toyota power-plant is running at peak performance, giving the clearest understanding of current performance across the rev range, an air of confidence spreading through the team as the season end proves their determination to develop and achieve continues to provide opportunity, progress and hope.

Final updates to the Pedders Racing Toyota 86 have seen insulation placed around the fuel tank to protect the cell and stop the issues arising from the tank heating with the warmth from the exhaust system, better clearance and protection now secured. Having suffered with a faulty fuel vent during the season, this has now been replaced with a custom made vent in order to ensure continual airflow through the system and stop the pressurisation of the tank.

Although the Pedders/Oz Racing #86 will head to Sandown showing the battle scars of the season that has been, Team Principal Grant Phillips is confident that this weekend will be one to remember, saying,

“This season has certainly been a year of development for our local team.

“We know what hard work is, we’ve done so much on this project and worked with determination at every step, and we’ve experienced the pride of winning a Class Championship before, but this time around it feels different.

“This car has been a world first in many ways. No doubt it’s been a huge challenge, but we’ve continued to pull it together under the pressure of this great sport to leave each race weekend smiling, so this time around, whether we win the title or take second place, our entire team of crew, families and sponsors can stand proud knowing everything that we have already achieved together.”

Having taken his, and the Toyota 86’s first production racing Class pole position at the penultimate round at Wakefield Park recently, Andrew Turpie will again share the drive with Phillips, also reflecting the confidence and pride in his team, saying,

“We’ve had many great years with this team, and this season has taken it all to the next step. Our little Pedders Racing outfit has an extensive network of sponsors and supporters, and they are the reason that we can keep doing this, feeling the rush, ticking off the achievements and really making ourselves a stand out in the series.

“Of course we’ll be heading to Sandown wanting pole, wanting to win the race, and wanting the Class Championship, but no matter what happens, the team have so many reasons to be proud so let’s wait and see what’s ahead – it’s been an exciting ride so far, so no need for that to change now!”