Russell puts Points on the Board in Adelaide 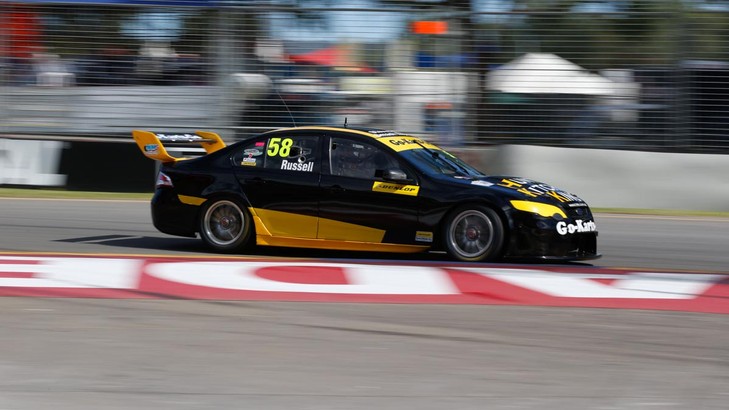 Novocastrian Motorsport’s Aaren Russell narrowly missed a Top 10 result in the opening round of the 2014 Dunlop V8 Supercar Series, on the streets of Adelaide as part of the Clipsal 500.

In his first weekend aboard the team’s Triple Eight-built FG Falcon, Russell finished both races to sit 13th for the weekend, banking solid points to kick off the seven-round series.

“It probably won’t go down as one our favourite weekends, but it definitely could’ve been worse and I learnt a lot about the new car, and how it works compared to my 2013 machine. That will put us in good stead for the remainder of the year,” Russell said.

After taking ninth and 11th in the two practice sessions, Russell comfortably secured a spot in the Top 50 per cent qualifying group among the competitive, 30-car field, with the new 2014 format seeing the introduction of a separate qualifying session for each race.

On Friday, Russell qualified 12th for Race One, and made ground to sit 10th late in the race. A chaotic Safety Car restart saw him lose several places, but the 22-year-old was able to recover to secure a 10th place finish.

From 11th on the grid, Russell made a strong start to Race 2, but several early incidents saw the Go Karts Go Falcon drop to 20th. Over the remainder of the 26 laps, though, a composed Russell regrouped to finish 13th for the race and round.

“The series is so competitive that if you’re a fraction off the mark, it hurts on the timesheets, particularly in qualifying where the gap from fourth to 11th was four-tenths of a second. We definitely had the potential to qualify inside the top five, but our laps in those sessions didn’t quite come together when it counted.

“We were able to pick up 10th in Race One, but other than a good start, Race Two was troublesome. I made a little mistake at the last corner, dropping two wheels off the track, which cost us about 10 spots, then had a couple of incidents in-front of me. I was a bit surprised to eventually end up 13th after fighting back from 20th, which was a good recovery all things considered.

“We’ll definitely take some positives away with us, though, review everything from the weekend and look forward to getting back out there at Winton next month.”