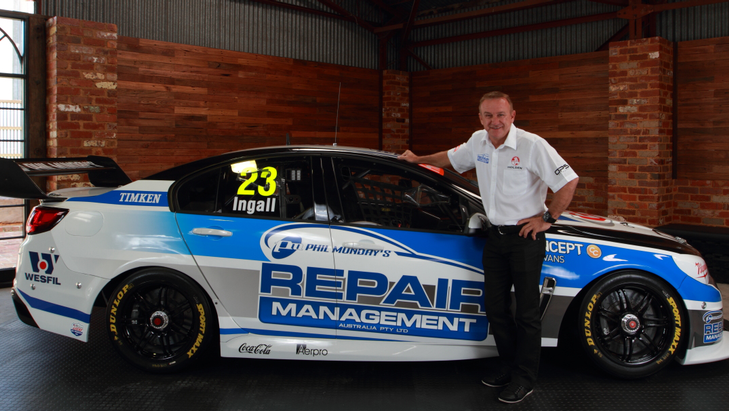 V8 Supercar star Russell Ingall has confirmed he will compete full-time in the 2014 V8 Supercars Championship for Lucas Dumbrell Motorsport.

Ingall, the 2005 V8 Supercar Champion, has signed to drive a Triple Eight Race Engineering-built Holden Commodore VF for the team and made the announcement today in Melbourne.

The Nunawading (Melbourne) based team has undergone a major restructure in the off-season and, after running two cars last season, will field a single car program in 2014.

Ingall, 49, is entering his 19th season full-time in Australia’s top motorsport category and says he made the decision to join a small, single car team for a number of reasons.

“Plenty of people will be asking why would I come to a small team that has been going through some growing pains,” Ingall said.

“But I see it as a challenge to help build the team, move it forward and keep it on the grid.

“There are plenty of hero drivers out there that would never ‘lower’ themselves to drive for a small team but I see it as an opportunity to be involved in something from the ground floor.”

Ingall is focused on helping LDM move forward on the V8 Supercar grid this season, though stressed the new deal is certainly no ‘comeback’.

“I wasn’t comfortable last year with how things were presented by some parties about my so-called retirement. I always maintained that if there was a suitable full-time opportunity for this season that I would take it.

“I haven’t changed my mind and made a ‘comeback’. I never left the sport or intended to leave the sport. There were some good offers to join some well-credentialed teams for the endurance races, but a full- time opportunity was always my main focus.

“At the end of the day, my love for the sport and racing cars is undiminished. I love the racing community, it’s given me a lot and I want to stay involved with it.

“’I think the man on the street will understand my situation. Anyone that loves their job or the industry they work in doesn’t want to get pushed out of it before they’re ready.”

“Holden has been instrumental in getting Russell on board and he brings a lot to our team with nearly 20 years of full-time experience at the top level of V8 Supercar racing,” Dumbrell said.

“He’s far from being a spent force in the sport. He brings an eye for detail that our team needs that comes from driving for some of the top teams in pit lane.

“We have a revitalised team and approach this year. While we are moving back to a single car program we have the intent and desire to return to a two-car program in the future.”

Simon McNamara, GM Holden Ltd Motorsport and Sponsorship Manager, said the addition of the most experienced V8 Supercar driver in history was the first step in LDM’s redevelopment.

“It’s also an opportunity for Russell to give back to the sport that has given him so much and to help this team grow in all areas,” McNamara said.

“Russell has been a great ambassador for Holden for the lion’s share of his time in V8 Supercars. We’re very happy to see him back on the grid in a Commodore in 2014.

“Importantly, it’s also a way of ensuring the team doesn’t fall by the wayside like others have during the recent off-season period.

“Lucas is a young, ambitious guy and we’d like to see this team succeed this season and move forward on the grid. He’s been working very hard and we support him in this quest to develop his team.”

Repair Management Australia’s Phil Munday says the opportunity to become a naming rights sponsor of Ingall and LDM fitted the business perfectly for its short-term plans.

“I’ve been involved in motorsport for many years and this is an ideal platform for us to expand our brand awareness as we go nationwide,” he explained.

“It’s a launch pad for our national campaign to expand our multi-shop operator group by acquiring businesses interstate as either joint venture interests or company-owned facilities, and providing national service to our client base and work providers.

“Being in the automotive repair business for over 35 years we’ve been a long-time sponsor of community clubs and events. A national sport like V8 Supercars, which visits every state of Australia, is hard to beat in the sporting marketplace.

“Partnering with Russell and LDM not only gives us national awareness, but the opportunity to participate nationally, which is why we’ve got involved at this level.”

Ingall’s first drive of the #23 Repair Management Australia Commodore will come at the V8 Supercar Test Day at Sydney Motorsport Park on Saturday February 15. The event is free for fans.

The first round of the V8 Supercars Championship will be at the Clipsal 500 in Adelaide on February 27 to March 2. Tickets are available now.