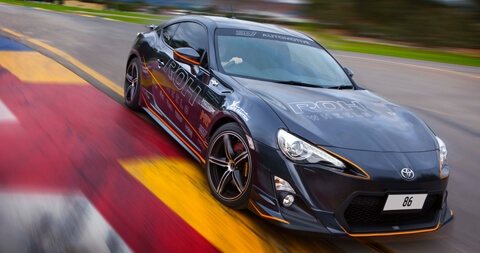 ROH Wheels being Australia’s only alloy wheel manufacturer, has gathered the support of some of Australia’s leading high-end aftermarket component suppliers, all coming together to make the ROH 86 Project a reality.  This collaboration of Australian aftermarket suppliers demonstrates that we can compete on a world class level and there is a place for continuing Australian design, development and manufacture.

Naturally, the first accessory which every modified vehicle requires is a great set of wheels and tyres.  This increases both grip and traction over standard OEM wheels and tyres.  The OEM 86 has either 16×6.5 for the GT or 17×7 for the GTS, the latter being Prius tyres which are great for fuel economy but not so good for grip.  Moving to 18×8 gives greater grip and handling advantages over standard, getting power to the ground more efficiently not to mention being safer in the wet. Thanks to Kumho for supplying premium 225/35 R18 Ecsta le sport KU39 tyre as the best option for the ROH 86, having brilliant grip especially in the wet and exceptional tread life.  This wheel and tyre combination was required to give the twin-charged 86 much needed traction.

The only complaint with the standard 86 has been the lack of straight-line speed and a lack of torque.  The engine is a bit asthmatic when going up hills and needs to be revved heavily to have a lot of fun. One approach to `fix’ this would be to try and adjust the valve timing and intake, but this could take a lot of time with minimal power benefit. The other option would be to make the engine rev higher, but the internal tolerances and componentry was not designed to deal with these extra revs as per a Honda S2000 engine of which most would agree was one of the best 2.0 litre Normally Aspirated engines ever built.  With an NA engine you have to decide whether you want power or torque, most manufacturers like Honda obviously go for high power figures i.e. 176kW @ 8,300rpm from a normally aspirated engine.  The cost to build this engine is quite high and the torque increase is often marginal, Torque being the key `ingredient’ we were chasing.

This is where forced induction has its place, therefore to supercharge, or turbocharge?  Supercharge provides instantaneous power and turbo has lag.  The whole concept of this car is that everything including power, steering and handling is crisp, precise and sharp so we didn’t want to change this.  So we thought why not do both and MRT Performance was the ideal fit for the 86 Project. The end result is low end power and torque achieved by supercharging and extra boost by turbocharging when the car gets going.  Brett Middleton from MRT Performance commented “this is not a new concept, that’s not the intention; our goal was to deliver a linear power delivery that is instantaneous like the original car in order to retain that same exhilarating feeling, just with a bit more punch.”
Mr Middleton continued “the goal was also not to increase power to ridiculous levels, as the engine internals were not designed to handle huge forced induction increases, but to achieve a reasonable linear power and an exceptionally high torque gain reliably”, from 190Nm at the hubs to 310Nm!   This equates to more Fun!

Brett Middleton from MRT Performance commented, “we have been building fast modified road cars for a lot of years here at MRT and understand what ROH wanted from 86 Project. A better, faster and improved version of an already dynamic car but still reliable to drive everyday” said Mr Middleton.  “This is why we recommended the Bullet / Sprintex Supercharger and the AVO Turbo kit to get the best of both worlds.  Power comes on immediately and continues with a strong flat torque curve with the combination of the supercharger and turbocharger. The result is a wider power band with increased performance.”  Thanks to customisation of the Factory ECU Code, using EcuTeK software we have been able to custom dyno tune the ROH FT86.  Power comes on immediately at start-up via the Sprintex twin scroll supercharger then the AVO turbocharger cuts in at higher revs.  The result is a more linear power and torque curve.

The ROH 86 is not just about power, braking and handling upgrades are essential for an all-round great drive.  So it has an upgraded AP Racing/DBA rotor brake package for superior braking as well as Pedders eXtreme XA adjustable coilovers, adjustable top mounts and Whiteline adjustable sway bars/bushes for optimal handling and grip.  What’s it like to drive, in a word – awesome!