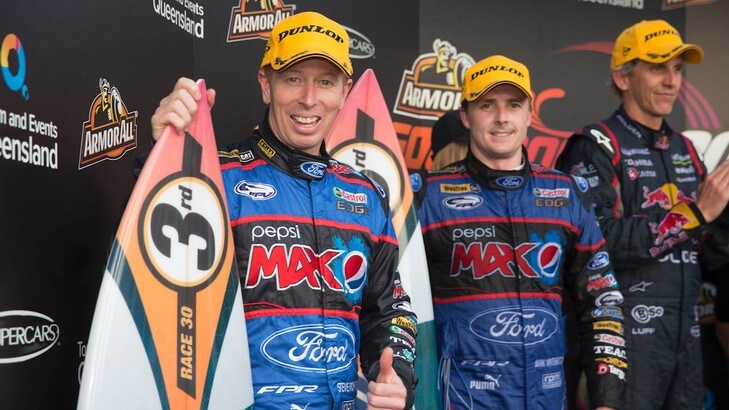 Supercheap Auto Bathurst 1000 three-time winner Steven Richards feels as if he never left V8 Supercars, despite retiring four years ago from driving full-time in the category.

“I still get into a V8 Supercar and don’t ever feel like I got out,” the 41-year old told v8supercars.com.au. “The cars don’t feel foreign. I can get into the car and get onto the pace reasonably close… and it’s great.”

Richards – out of contract with FPR after the final PIRTEK Enduro Cup event – felt a change was necessary after seven seasons with the team, and is looking forward to jumping behind the wheel of a Commodore with a racer he has competed against for many years, Craig Lowndes.

“Craig and I have driven against one another since Formula Ford days, and I think we both have an amount of respect about the way the other goes about their driving,” Richards said.

“It’s terrific, but Craig is like any topline driver in V8 Supercars at the moment – you’d give your eye teeth to sit alongside them and have a drive.

“I’m so excited about going car racing in whatever I do now because I’m doing varied different classes in top-line cars with great teams, and I’m enjoying it more than I ever have. I think if you’re enjoying it sometimes the results tend to follow in your favour.”

RBRA has won five of the last 10 Supercheap Auto Bathurst 1000s, and while Richards and Winterbottom were victorious in 2013, both Triple Eight pairings surrounded them on the podium and trumped them overall in the PIRTEK Enduro Cup tally.

“Clearly I think any driver in the world at the moment would be pretty honoured to slide into a seat alongside Jamie (Whincup) or Craig, they’ve clearly been a fairly high benchmark for everyone to try and follow over the last few years,” Richards said.

He admitted to having a few options to choose from for a co-drive after the success of 2013, but did not begin negotiations until well after the ARMOR ALL Gold Coast 600.

Richards has three Supercheap Auto Bathurst 1000s to his name, and interestingly, each victory has been with different co-drivers, in different teams and in a variety of vehicles.

His first win was in 1998 with Jason Bright at Stone Brothers Racing, after ventured home from overseas to keep a hand in the Australia category.

“I had travelled overseas in 1998 to do some test driving with Nissan in the British Touring Car Championship,” he explained.

“I wanted to keep my hand in at V8 Supercars for the enduros and at the time I was lucky enough to get the opportunity with Stone Brothers. At the time, Jason Bright was having a good run in the Championship and hadn’t quite polished off a result. But clearly you could see the car was very competitive. That year I had a few options available to me and that just seemed like the best choice – and it was!

“Even that year we were probably an outside bet in the early part of the year because we were essentially a new team – Gibson Motorsport had kind of struggled through a few years – but then again we got up for the result because I think we had a very good driver combination as well as a good team.

“And then the last one. After seven years with FPR, it’s been absolutely fantastic and to win it with Frosty was one of the career highlights. I’d seen him come through as a young guy and become one of the best drivers in the country, I believe, and it was nice after such a long time to get that on the board.

“Probably after seven years it’s time for a new challenge.”

On the other side of the Red Bull garage, Whincup will again pair with Paul Dumbrell. The two won the Great Race in 2012 and were runners up last year.

Tickets are already available for the Supercheap Auto Bathurst 1000 in October, with the V8 Supercars to hit the track for the first time on February 15 at the Sydney.com Test Day.