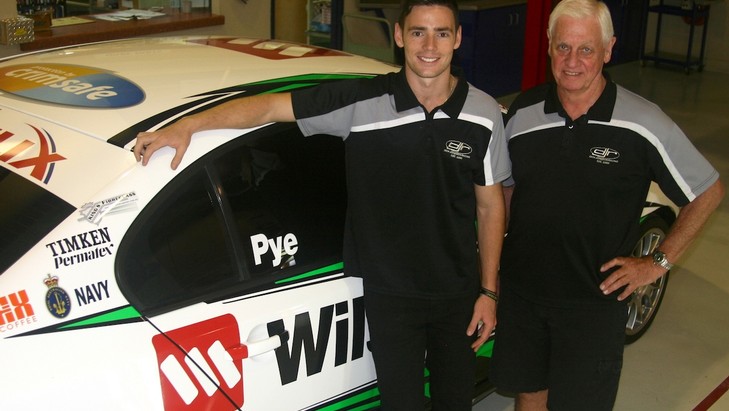 Scott Pye – who is about to enter his second season of V8 Supercars – believes he will grow, and perhaps bloom, at Dick Johnson Racing.

Racing great Johnson was impressed by Pye’s attitude and line of questioning when they met last year. Among his questions, Pye asked for assurance from the famous DJR stable that the team had a strong infrastructure capable of delivering results; which they did in 2013 with fellow rookie Chaz Mostert.

“The most important thing for me is the infrastructure, having just come from a very small team, but also having seen in the past at Triple Eight how it’s done,” Pye told v8supercars.com.au.

Having been taken under the wing of Roland Dane, who is his personal manager, Pye contested last season with Triple Eight supplied team Lucas Dumbrell Motorsport, while spending days away from the race track working in the Triple Eight workshop.

“For me, it’s important to know everyone’s as focused on a sole job as I am. I then need to go as fast as I can and give the best feedback I can,” he said.

“Obviously there’s always a few little technical questions here and there (with moving to a different team), but more importantly we (Pye and Dane) saw just how much that team grew last year and along with Roland, I wanted to make sure  DJR was headed in that direction.”

For the young gun, DJR seems rich with opportunities. From the technical connection with Championship runner-up team Ford Performance Racing, engineering guru Campbell Little on-board, backing from Wilson Security and the prestige associated with a team carrying a legend’s name, now it’s all about fitness, preparation and getting behind the wheel.

“I can see they’re a growing team now and they just want to go racing,” Pye said. “Our main focus is to just go racing – Dick loves it, and I think that’s why the team made it through those tough times and now is on the up.”

DJR has a ride day scheduled for February 11, and while the team cannot treat that as a test day, it is a chance to ensure the ergonomics of the car are right and everything is to Pye’s liking.

“Having a two-year program locked away is a big relief – it means I can just focus on doing, and not having to worry … as long as I perform I have my job, a comfortable position every driver should have at some point, which I hope will allow me to maximise my potential.”

Pye’s debut season in the Championship wasn’t without its challenges, beginning with a string of high profile accidents that severely damaged his Holden Commodore.

Dick Johnson is not a fan of damage – and the price tags that go along with it – but Pye said that was not a concern of his new team boss.

“The last half of the year we didn’t really do any damage. We had that little one at Gold Coast, which was probably bad timing more than anything, but other than that I didn’t bend a panel.

“Bathurst we went all weekend without scratching a rim, so we got that out of our system pretty early in the year, unfortunately.

“It was costly, it was expensive … but I think I’m on the other side of that wave now. I don’t think any team owner or manager likes the driver damaging the car! I did my best and go as fast as possible.”

Stay tuned to v8supercars.com.au for a sneak peek of DJR’s 2014 livery before its unveil.