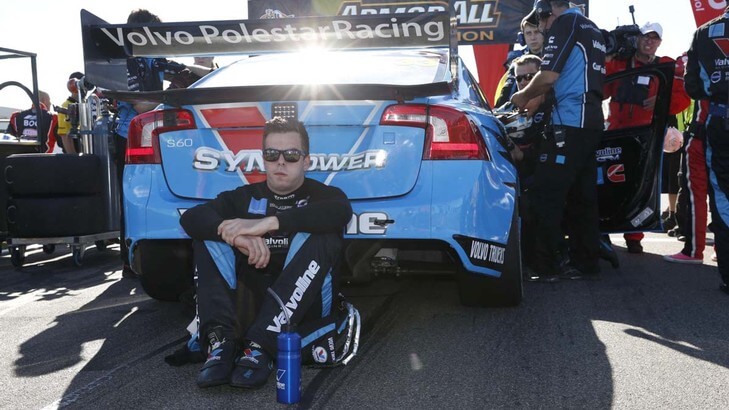 Scott McLaughlin is using his first career ARMOR ALL Pole Position as a motivator, as he looks ahead to debuting his Volvo at his home event, the ITM Auckland 500.

The Valvoline-backed driver endured a difficult weekend at Winton after mechanical dramas and a drive-through penalty for pit lane speeding kept him from capitalising on his car’s raw speed.

But earning his first pole in a V8 Supercar – something he was unable to achieve in the Dunlop Series – is the bright spark in an otherwise cloudy pool of results.

“I think it’s allowed us to keep pushing on and know we can do it,” McLaughlin told v8supercars.com.au of his milestone qualifying effort.

“Gutted though – I don’t know what happened… but I honestly didn’t think I sped.

“But those things happen – heading to Pukekohe, we’ll be right.

“We’re lucky to leave Winton with 10th in the Championship, so that’s positive, but unfortunately (both days) I felt we got robbed a little bit.”

The weekend was nothing short of a whirlwind from the difficult track conditions on Friday, a DNF and last place finish Saturday, and then touring pit lane after having led part of Sunday’s 200km race.

Throw in an emergency engine change, chasing the clock between Saturday’s two races, and a battery drama calling him in from the race lead that afternoon and it’s no wonder the 20-year old described Winton as a “bogey track” for his Garry Rogers Motorsport team.

“We didn’t capitalise when we should’ve – we had pole and we probably should’ve capitalised a bit better.

“But at the end of the day those things happen, rules are rules and we just deal with them.”

“It illustrates what can be achieved if we persevere,” he said in his post-race report.

“Unfortunately we didn’t get the results that our effort and ability deserved at Winton.”

For McLaughlin, he can now look forward to returning home for the April 24-27 ITM 500 Auckland, to a track where he earned his first main series V8 Supercars Championship win this time last year.

“I’m pretty pumped!” he said of returning to Pukekohe.

The Kiwi brigade has been flying, dominating qualifying at Winton and producing a one-two-three lockout on the grid on Saturday. All three New Zealanders sit in the top 10 in the Championship, Fabian Coulthard third and Shane van Gisbergen sixth, to McLaughlin’s 10th.

“It’s pretty awesome and good for the Championship – and history, I don’t think it’s happened in V8s,” McLaughlin said of he and fellow countrymen’s strong form.

“There was always Murph (Greg Murphy) battling up the front there but he was the only Kiwi almost.

“Now we’re back and there are a few of us who are very competitive in good cars, so hopefully we can put a good show on for the Pukekohe crowd.”

With a range of promotional activities on his schedule – including a visit to the Cenotaph on Thursday – McLaughlin has plenty to keep him busy before the event, running from April 24-27.

Tickets are available now for the ITM 500 Auckland, running across the ANZAC Day weekend.