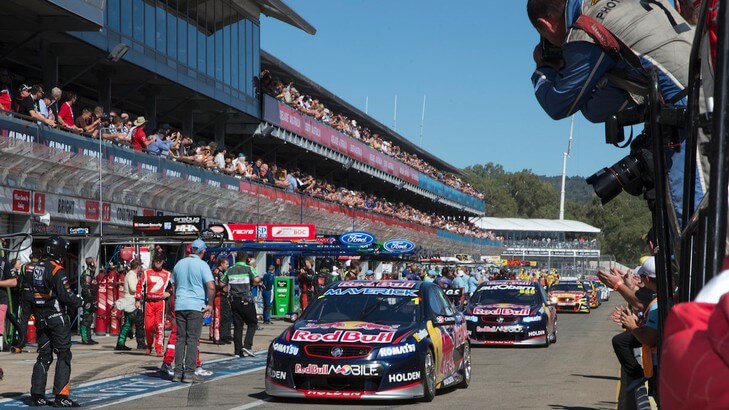 While Red Bull Racing Australia remains at the top of the order, there are some changes with Lucas Dumbrell Motorsport to have its own boom for stops.

Pit lane grid position is determined from each team’s finishing position from the previous year, taking into account teams with multiple cars, or single car entries which pair together (official wording can be found in section D2 of the Operations Manual). Two cars share one single pit bay, meaning teams have to work strategically in order not to double stack, one car waiting behind while the first into the pits is serviced.

Right behind the Championship winners is Ford Performance Racing, with its four cars across two bays. Jumping up three positions from last year, it will be Holden versus Ford at the front as the rival teams battle to perform the quickest stop and overtake the other in pit lane.

Brad Jones Racing follows in the order, and while Jason Bright and Fabian Coulthard will share a bay, third entry Dale Wood will share with competitor Shane van Gisbergen, after TEKNO Autosports’ scale down to one car.

The teams split crew members during a pit stop, with the two wheel changers on the left hand side, the fuel filler and the fire extinguisher from BJR, and the car controller and two right hand side wheel changers from TEKNO. Both teams will use their own ‘dead man’ who controls fuel flow at the rig. The split of personnel is determined between the two teams, not V8 Supercars.

Walkinshaw Racing is next, still behind TEKNO in the order. The Holden Racing Team cars will have the first bay, and now the team runs four cars, Tim Slade and Nick Percat will share a bay, whereas last year’s Supercheap entry paired with customer team Tony D’Alberto Racing.

Dick Johnson Racing lines up ahead of the Volvo pairing and Nissan’s four entries, with the two Erebus beasts ahead of LDM in the final bay. Erebus’ fall from second, to near pit entry is the most significant change in this year’s order.

Not having a team to share that final boom with, LDM will literally take matters into its own hands – all team members will need to participate in a pit stop.

“With 25 entries, being an odd number, we’ll be on our own in the 13th boom,” Dumbrell told v8supercars.com.au

“We will supply all crew members for pit stops. It’s quite hard – we’re going through the logistics of it now, and every one of our crew members will be involved in the pit stop, which is a bit of a disadvantage, but at the same time it’s what it is with 25 cars.

“Not even the engineer will be at the telemetry screens, he will be performing some element so it’s tough for us, but that’s what it is and we’re not going to dwell on that just focus on the job.”

For Dumbrell, just concentrating on one car and giving newly announced Russell Ingall his best shot is the key.

“The biggest thing for us is one car to focus on. For Rusty, we want to make sure he has everything he can, so any new bits we’ve got will go to him and anything we develop will go to him so I think that’s refreshing to know he is the number one, the guy everyone’s working towards.”