Perkins Can’t Wait to Jump in the Driver’s Seat 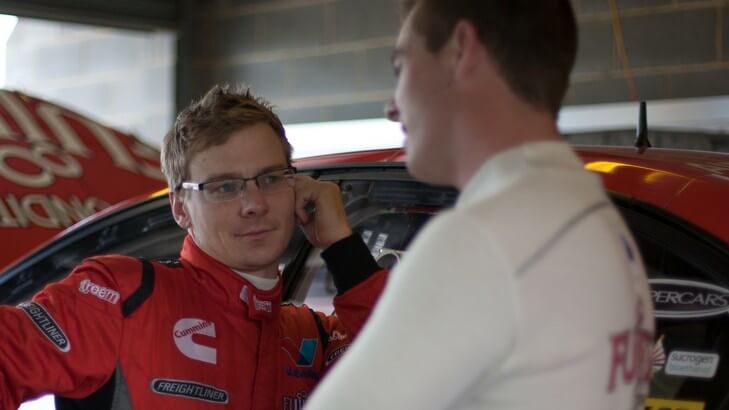 It’s under one month until the V8 Supercars hit the track at the Sydney.com Test Day, but for new recruit Jack Perkins it can’t come soon enough.

“I can’t wait until the Sydney test comes around because I get to drive a race car – they’ll have to pull me out of it at the end of the day. I’m looking forward to it,” he told v8supercars.com.au.

Perkins’ position with Team JELD-WEN, part of the Ford Performance Racing stable, was announced just prior to Christmas, a present come early for the 27-year old.

“Without a shadow of a doubt,” he responded when asked if the seat was the best available option he’d considered.

“Triple Eight finished one and two and FPR finished third and fourth, and won Bathurst.

“To be involved with FPR is fantastic, it’s what I’ve dreamt for and hoped for over the last few years… I’ve got the drive and now the hard part is what’s coming up in the season – to perform, and perform well, week in week out and do a good job for the whole team.”

The Team JELD-WEN car was the only one of the FPR four that did not secure a race win in 2013, with David Reynolds taking his maiden victory at the ARMOR ALL Gold Coast 600, and Will Davison and Mark Winterbottom finishing third and fourth in the Championship.

Perkins replaces Alex Davison in the Falcon, who finished 13th in the points.

He knows his job is to deliver results.

“I think we need to be, like I say, performing week in week out to justify putting me in the car,” he said

“For me a Championship goal is top 10 but obviously we want to be finishing a few of the races well inside the top 10 and knocking on the door of some serious top two and three results… I’m pretty confident I can match my teammates.”

In the past this time of year has been all about the enduro for Perkins – he would be trying to secure a position as a co-driver now. But this year it’s fitness training, meeting the new team and preparing for the test day, which he described as a dress rehearsal for season opener the Clipsal 500.

“It’s so tough in our sport, we all come back from Christmas break and most other sports when they choose to get back into it and train they’re out there hitting balls or kicking footies and we’re only in the gym. We don’t get to drive a race car until mid-February so that makes it quite tough.”

The test day is an important foundation for Perkins, who hasn’t raced at the concrete-lined, punishing Clipsal 500 in the main series since 2009.

“For me it’s about getting comfortable with the car and knowing what the car needs to be a fast race car.

“I’ll be working with my three teammates to make the most out of that, and my engineer, so it’s really about working with the team for the first time.”

The engineering line-up at FPR is yet to be confirmed. Campbell Little ran #18 for the majority of 2013, with FPR veteran David Paterson taking over for the final two events after Little’s departure from the team.

Several drivers named Perkins the most valuable co-driver when reflecting on 2013 with v8supercars.com.au – something the 27-year old doesn’t take lightly.

“There’s no better accolade than receiving something from your peers, the people you race against and who are in the sport. To read a couple of those was pretty cool, it really shows I worked pretty hard, done a good job and people are taking note. I guess it’s hopefully why (team owner) Charlie (Schwerkolt) and JELD-WEN and FPR chose me to drive the race car, I can’t thank those who have given me the opportunity enough.

The Sydney.com Test Day is the first time V8 Supercars will appear on the track, on February 15 at Sydney Motorsport Park.