Pedders/Valvoline Proton makes it 4 from 4

Round 4 of the Australian Manufacturers Championship was held in the heart of Melbourne at Sandown Raceway over 2 days of non-stop action. Leg 1 of the Dial Before You Dig AMC 500 was held on Saturday with Grant Phillips taking the start line to try and make up for a missed opportunity with Pole position going to the Gray/Jarvis Suzuki Swift.

Phillips took it straight to the Swifts from the moment the lights went out with the first 8 laps described as “the best racing I have ever done” For 27 laps Phillips battled hard to take the lead in class before working on his next target, the class D car of McGill/Brunsden. The Phillips session wasn’t without its own special moments when for some reason the exhaust blew itself apart causing auditory distress for the driver and making it difficult to communicate with the pit crew.

The first Safety Car saw Phillips pit and Andrew Turpie taking the wheel for the remaining laps. It was almost smooth sailing for Turpie, with laps being set at consistent times he was able to capitalise on position and bring the team home in a comfortable 2 lap lead from the first of the Swifts. With cars catching fire and others hitting the wall or losing wheels, Turpie was very much in the thick of things. Sunday saw Leg 2 shortened by 20 laps due to a couple of really big accidents, including a Porsche into the wall at Turn 8, then when the Swift Series cars came out, one ended up into the wall opposite at Turn 8 then on its roof.

Phillips took the wheel for the start of leg 2 in position 13 and after a fantastic start he set about trying to put some distance between the Proton and the Swifts, however it all came unstuck when at the end of the first lap, a dead Evo 9 caused a Safety Car which saw most teams complete their compulsory pit stop, a task that did not apply to class E cars. Phillips missed the instruction to stay out and entered pit lane following the rest of the field when the Swifts jumped on the opportunity to gain position and tried to get a lap back. Realising his mistake Phillips was on a mission to get past the two Suzuki Swifts. After rounding them up and putting some distance on the Swifts while completing a blistering fastest lap of 1.33:5252, Phillips came in for the driver change with Daryl Martin.

Straight away there was trouble with the Valvoline sponsored Proton, the driver change caused an issue with the radio squelch meaning there was no communication between the driver and pit crew. Martin set about putting some good times down and taking the Pedders Team to victory and some more distance between the Proton and the Swifts. Then the opportunity to take on the Celica of McGill/Brunsden saw the two cars in a great display of racing around the unique Sandown Raceway. Martin said, “I was having the best time racing with Matt McGill” and “there was a bit of bumper to bumper action with Matt’s Celica a lot slower in the corners than the Proton, there was one time in turn 10 though where I rubbed a bit harder than I was expecting and I’m sure Matt was a bit surprised by it too because next lap I got past him without too much difficulty.” continued Martin.

After setting what is believed to be the fastest lap (1:32.2406) by a Proton Satria GTi at Sandown Raceway on lap 100, Martin continued on his fast pace until he came unstuck 4 laps later after letting one of the much faster Mitsubishi Evo’s through heading in to turn 7 it braked heavier than Martin was expecting which kept him wide on the dirty line. This resulted in a brake lockup and the car understeering straight into the sand trap at turn 9. Angry with his own error, Martin vented some frustration on the steering wheel before composing himself and getting back on the track. Unfortunately there also seemed to be a clutch problem that got worse as the laps continued, with the final 6 laps being run with no clutch at all. Keeping fingers crossed, Martin managed to bring the Pedders Racing Proton home for a chequered victory in class E continuing their unbeaten run.

With only the Eastern Creek 8 hour Endurance round to come on December 9th to the 11th, the team is faced with some repairs before making the trip north and hopefully securing a clean sweep of class E in the Australian Manufacturers Championship and the Australian Endurance Championship. Grant Phillips currently holds a commanding lead in the Drivers’ Championship in class E with 482 points, second place is tied between Andrew Turpie and Daryl Martin on 240 points while 3rd place is held by Maddison Gray on 182 points. 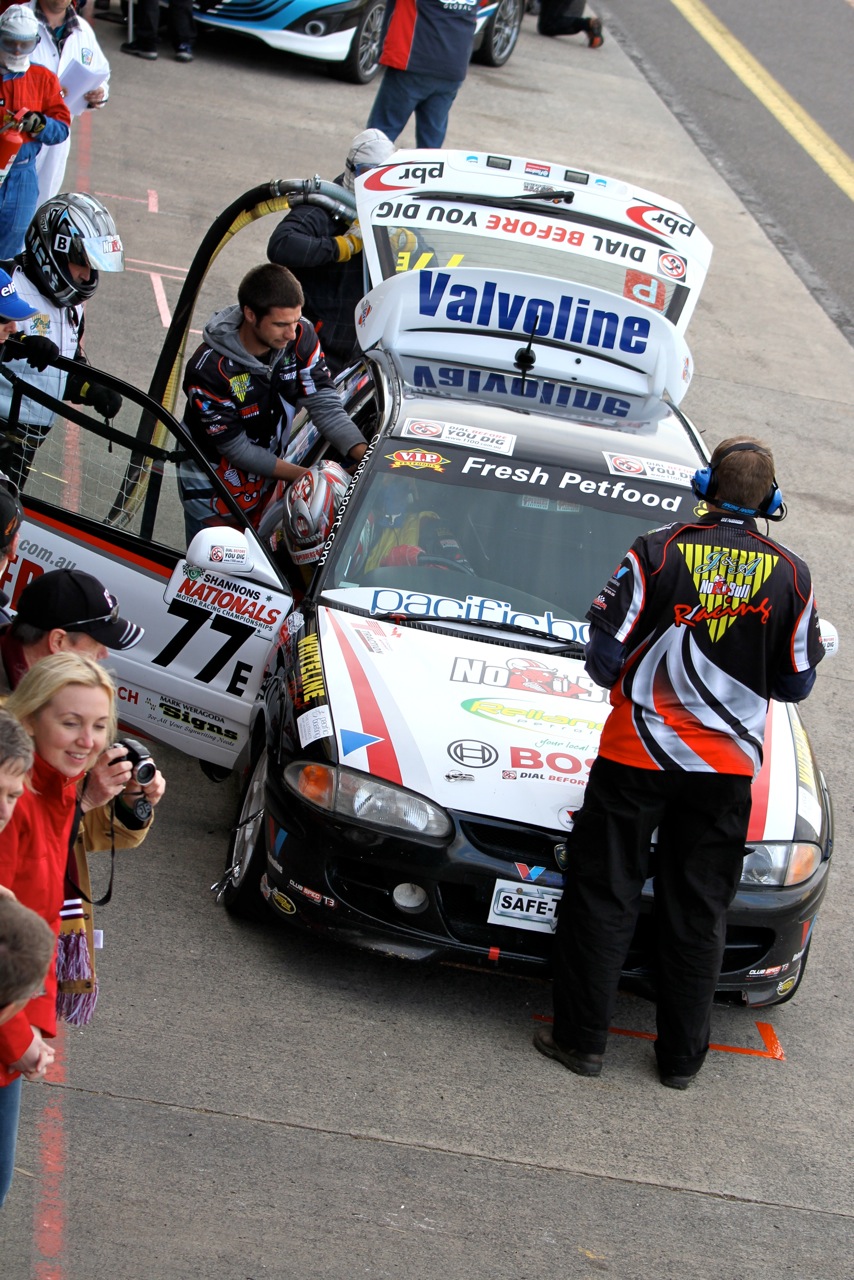 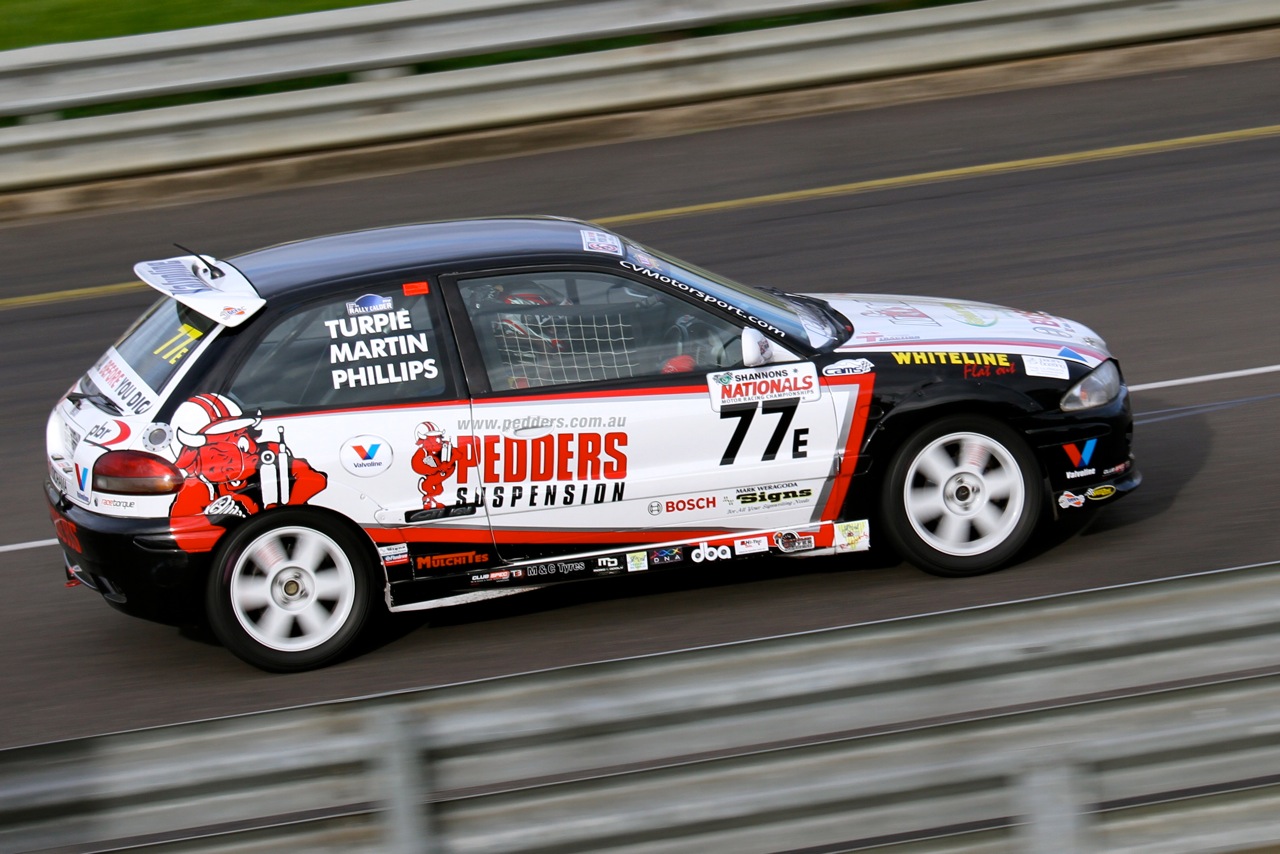