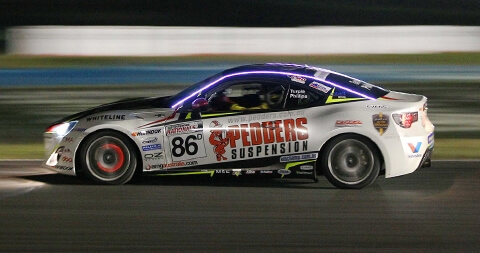 Queensland Raceway’s Round 3 of the Australian Manufacturers Championship has seen history as the Pedders Racing lineup of Grant Phillips and Andrew Turpie secured the first recorded Class race victory in a national production racing series for the much hyped Toyota 86 during the opening race of the event. Having already locked in their place in the history books by building, homologating and debuting the world’s first production racing Toyota 86, the local Bendigo team continues to focus on research and development of the sporty Toyota, with the first Class race win marking a sign of what more is to come.

Practice Friday began with the arrival of Australian international driver, Chris O’Shannessy, on hand to provide a greater knowledge and experience, himself a Toyota 86 racer, and soon to head to the Seeping 12 Hour to join his TRD Japan/Malaysia team for their Toyota 86 race commitments. With O’Shannessy at the wheel for the early sessions, the Pedders Racing crew able to make comparisons in performance, handling and power between their locally built entry and the international machine from TRD, learning more as they progress forward in the production racing ranks….