Pedders Racing – Season Start at The Top of The Mountain 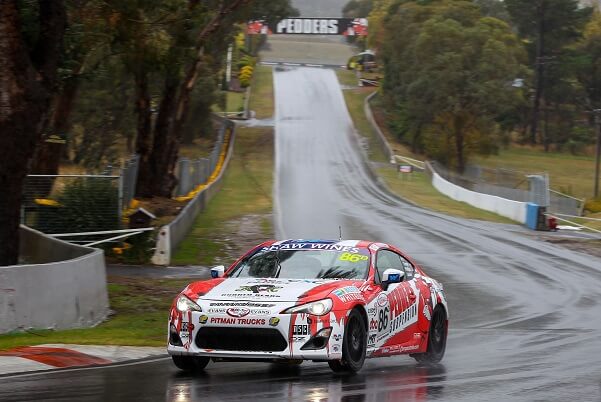 As we try to cope with the surprise of the year already being a quarter over, it comes as no surprise that the volunteer crew at Pedders Racing have made the most of the months past in the lead up to next weekend’s inaugural HiTec Oils Bathurst 6 Hour at the icon that is Mount Panorama, Bathurst.

Since wrapping up a second national production racing Class title in November, the Pedders 86 has been at its Motorsports Training Australia base for a complete post-season review, with many components having completed two seasons of endurance racing. After returning from the Christmas break, students and teachers followed through final preparations of lubricants, electronics, tyre and oil pressures, brakes and idle performance, in time to release the beast back to the Pedders Racing crew for an initial pre-season test.

Joining fellow Benalla Auto Club members in early February, Pedders Racing’s 86 starred at the official opening of the newly resurfaced Winton Motor Raceway, taking to the track as the first national racing competitor to experience the fresh surface, with glowing testimonies. As happy hot lap passengers left the pits, the Pedders 86 headed back out onto the tarmac, but it wasn’t to be a complete test day as planned – the engine temperature soaring as the usually pressure-less cooling system pressurised, the head gasket deciding that two seasons had been enough.

Back to Motorsports Training Australia and the second year students took control, removing the engine, completing the strip down to confirm the diagnosis before replacing all gaskets. The dedicated student crew endured surprised seeing the strong condition of the 2014 engine, a very positive finding for the engine’s component reliability. Engine refresh completed and #86 returned to the senior crew for another scheduled Winton Motor Raceway test. This time it was all in the sight line – fuel burn, tyre and brake wear, radio and camera systems, data logging systems, pit stops practice, driver performance and strategy.

With a successful day signed off, the Pedders Racing crew left feeling more prepared than ever before. With the Bathurst Motor Festival (25-27 March, Mount Panorama) just one week away, the team are un-surprisingly fully focused on achieving Class success and a memorable outright result in their most enduring event to date – the Bathurst 6 Hour.