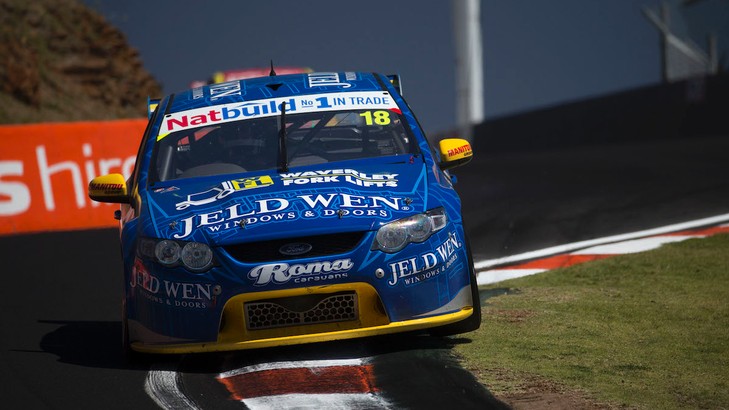 The Manitou Group has today announced its continued support of Team JELD-WEN in the V8 Supercars Championship.

Manitou began its partnership with the team in 2013, taking signage on the Ford Performance Racing prepared Ford Falcon FG, and will continue to build on the strategic advantages that the sport of V8 Supercars provides.

This also builds on Manitou’s involvement as provider of recovery equipment at V8 Supercars race events.

Manitou Australia’s Managing Director Stuart Walker said the partnership between Manitou Group and Team JELD-WEN had proven to be of great value to the company, and he expects 2014 to be a great year.

“Team JELD-WEN is a great organisation, who are focused on assisting us in building our business in the region, along with offering extensive networking opportunities at both races and external events,” Walker said.

“Manitou has the region’s most extensive dealer network for tough terrain materials handling, and the ability to tie these activities into this regional network is very appealing.

“With the signing of Jack Perkins, and the continuing association with Ford Performance Racing, we’re excited about the possibilities for the 2014 season, and are looking forward to a big year for Manitou and the team.”

Team owner Charlie Schwerkolt said he was very pleased to continue the team’s relationship with Manitou.

“I’ve worked with the Manitou Group for many years through my Waverley Forklifts business, so be also be partnered with them through Team JELD-WEN is very satisfying. We’re all pushing hard for 2014 to be a massive year for the team, and can’t wait to hit the track!” Mr Schwerkolt said.

The 2014 V8 Supercars season begins with the Official Test Day at Sydney Motorsport Park on February 15, before the first race meeting at the Clipsal 500 in Adelaide across the weekend of February 27 to March 2.