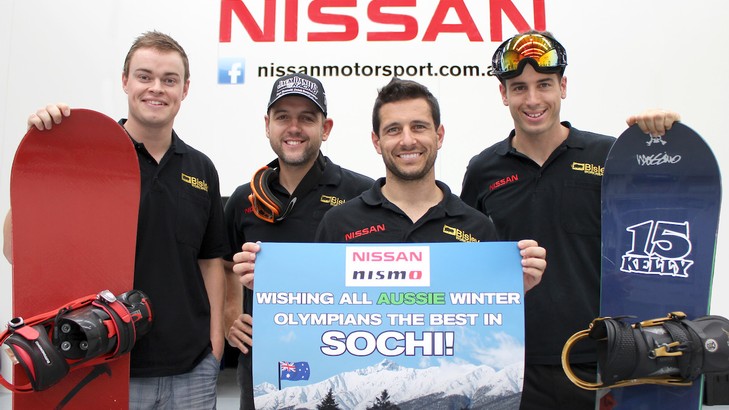 What do V8 Supercars drivers and Winter Olympians have in common?

The heat of a V8 Supercars street race in Adelaide may be a polar opposite to figure skating or freestyle skiing, but the fact is, the principles of elite competition remains the same – it takes commitment and dedication to reach the highest level of your chosen sport.

That’s why Nissan Motorsport’s four drivers are throwing all of their support behind the 60 Australian sports stars that will take to the snowy slopes of Sochi, Russia this month, to prove their worth in the 22nd Winter Olympic Games.

Rick Kelly, 2006 V8 Supercars Champion and keen snowboarder, said he would be watching the games with interest.

“I can appreciate the effort that each of the winter games athletes have put themselves through,” said Kelly.

“As a V8 Supercars driver, I feel privileged to compete at the top level of Australian sport. What Olympians do, for me, is another step above what I do.

“I’ll certainly be watching the games from here in Australia, and like all other Aussies, we appreciate all the effort they’ve put in to be where they are.

“On behalf of Nissan Motorsport, we wish them all the best at the Winter Olympics.”

Nissan Motorsport will hit the race track for the first time this year at the official pre-season test at Sydney Motorsport Park on February 15. The team’s two Jack Daniel’s Nissans and two Norton Nissans will be unveiled in the week leading up to the anticipated test day, the Wynn’s sponsorship announcement giving fans a peak at the front of Kelly’s Jack Daniel’s Altima.

The sydney.com V8 Supercars Test Day is free for fans to attend, the beasts running twice on track with sessions between 9am and 5pm, and a 12.30pm grid walk to get up close and personal with the cars and stars. Click here for more information.