Kelly and Davison Rev Up With Shark Encounter 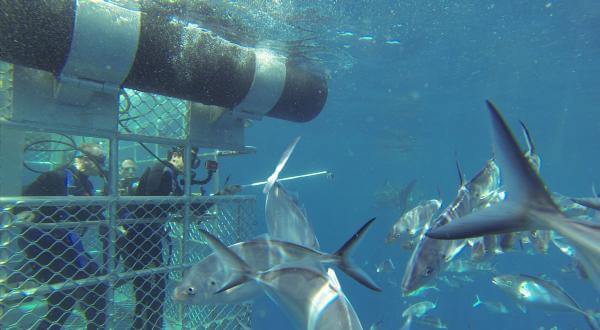 V8 Supercars drivers Will Davison and Rick Kelly took a unique approach to getting race ready in their preparations for this month’s Clipsal 500 Adelaide when they came face to face with giant great white sharks off the coast of South Australia in Port Lincoln.

Self-confessed motorsport enthusiast and Britain’s most successful ever Olympian, Sir Chris Hoy, joined the duo on their search for their next adrenalin rush before they hit the Adelaide circuit in 24 days’ time for the new Clipsal 500 race format.

“We all know the Clipsal 500 is a huge race so Will and I decided it called for a huge preparation. What Will doesn’t know is I structured my dive over two sessions to prepare for the new two 125 kilometre race format so I think I got the edge over him today,” Kelly said.

“It’s something very different to what I’m used to and to see the sharks come from basically nowhere to appear in front of you is really quite frightening, but it was still really cool.” 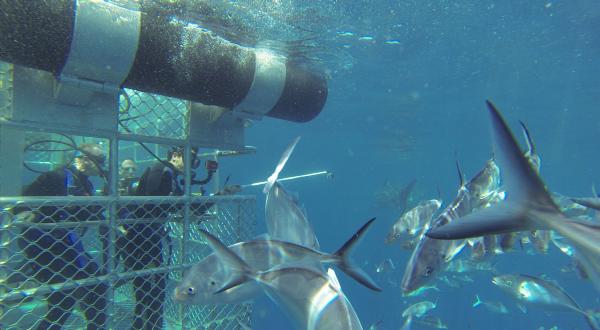 New Erebus Motorsport driver Will Davison said diving with sharks was a totally unique experience and a completely different adrenalin rush to that of a V8 Supercar.

“I know exactly what to expect in a race car, I’m in control,” Davison said. “It’s all about performance, challenging yourself and achieving results.

“l was a little nervous actually. Rick, Chris and I were discussing the nerves and we didn’t know if we were getting cold or getting goose bumps, but today was all about facing the ultimate fear. I faced this fear ok, so the next time I come back to Adelaide in a few weeks for the Clipsal 500 I’ll be laughing,” Davison said.

Sir Chris Hoy said shark diving was truly a once in a life-time experience and it was great to meet both V8 Supercars drivers.

“I’ve retired from cycling now and motorsport has always been a passion of mine and now because I’m not competing anymore I get to have a little go myself, so I’ll have to get these two to give me some tips,” Hoy said. “I’ll be keenly following the Clipsal 500 to see how Rick and Will perform.

“I think when we initially discussed it I thought yeah that sounds fun let’s go have a swim with some sharks, but when I got there and I could see they were massive I was a little apprehensive. They’re such graceful creatures though, the way they move underwater for something so big is phenomenal.”

Clipsal 500 fans won’t have to wait long to see Kelly and Davison battle it out on the Adelaide street circuit in a weekend of racing which includes two 125 kilometre races, an exciting new twilight race schedule, a 250km showdown and ARMOR ALL Top 10 Shootout Sunday, plus a massive line-up of off-track entertainment headlined by Grammy and ARIA Award winning musician, Keith Urban.

Tickets are available to the season opener now.