The Journeys the Destination….No Bull!

Pedders Suspension has sponsored Michael Butler’s production company, ‘Sacred Oz Productions’ on the road to film there latest documentary titled; ‘My Bush Tukka Adventures with Samantha Martin’ and it is a 4 part ½ series for NITV (National Indigenous TV).

This is not just any old 4 wheel drive, it has been painted by well over 200 Aboriginal Artists and even has Nelson Mandela’s hand prints on it, alongside Ian Thorpe and Jack Thompson’s.

The vehicle has been in 5 major Museums including the National Museum of Australia where Gough Whitlam placed his hand print on the Land Rover, a reversal of the symbolic action at Wave Hill in the 1970’s when Gough poured red sand into the hands of Vincent Lingiari.

The Message Stick vehicle had a total refit before travelling around Australia to film this new documentary. The only problem was it still had the original suspension on it and it had to go!

That’s where Pedders Suspension came to the rescue in the form of sponsorship.

Michael Butler, the Director and Samantha Martin the Producer/Host of the travel adventure series flew from Brisbane to meet the owner/operator’s of Pedders Suspension in Darwin, Dean and Libby Shaw.

Dean and Libby where fantastic and couldn’t do enough for us, Michael said.

When Dean first saw the vehicle he scratched his head and said a few interesting and colorful words on how to get the suspension right, he contacted Pedders Melbourne Head Office to manufacture the new hand-made shock absorbers needed for the front and rear of the vehicle!

After 60 years, Suspension has come a long way, but Pedders where very much up to the task in supplying the right shocks for the journey ahead. That still wasn’t enough suspension… So on went the Pedders TrakRyder 4WD Air Assist Airbag Suspension, they are the best airbags money can buy to raise the vehicle to its full potential. Dean had the task at hand and relished in the fact he was able to work on a Land Rover, Not! He mentioned several times he had a love/hate relationship with these vehicles. Dean had a very interesting quote when fitting the supplied items onto this one of a kind vehicle, he said: ‘I feel responsible for you guys while you’re in the outback and I just want to see you both come back safe and sound! That’s why I’m happy to put the time and effort into getting it right.’

After 3 days of blood, sweat and swearing the LandRover was finally finished, Michael and Samm followed Dean and Libby out of Darwin to test drive the vehicle and ‘The Message Stick Vehicle’ drove on rails…..It was a totally different 4 x 4 to drive in Michael said.

The old girl was transformed into a state of the art 4 x 4 and it’s all thanks to Pedders Suspension, Dean, Libby and Adam for their valuable sponsorship.

What was the trip about?

Throughout this 4 part 1/2 hour series titled; ‘My Bush Tukka Adventures with Samantha Martin’ she will explore the country finding eatable and poisonous bush tucker that Samantha was taught from her Aboriginal Elders.

The way Mother Nature is changing, the human race may need to revert back to finding Bush Tucker in a traditional way as our Earth is dramatically shifting. Australia’s breathtaking landscapes are teeming with Bush Tucker and Aboriginal people have long had the ability to identify edible Flora and Fauna in a country that offers the diversity of fresh and salt water sustenance, tropical rain-forests nutrients, deserts and vast wetlands.

There first stop was the famous North West Kimberley region where Samantha grew up. Samantha will draw on the knowledge she has been taught from her elders to fish, hunt, collect bush tucker and survive in the harsh Australian continent using sacred techniques and ancient medicines that are only now being recognised in our modern world.

They then traveled across to Arnhem Land in the North East Corner of Gove were they filmed hunting and gathering practices and traditional survival skills that are fast becoming les known about in this modern world, it is common knowledge for this information to be passed on as it has been for well over 50,000 years by the Aboriginal people, we are just using a different medium such as film to pass this information on now.

Pedders Suspension has played a major role in getting The Message Stick vehicle around Australia and with out there valuable sponsorship in filming this documentary, they both may not have made it back in one piece.

Michael and Samantha did arrive back safe and sound and dropped in and surprised Dean and Libby after 8 months on the road and celebrated with a BBQ Darwin style.

The Journeys the Destination….No Bull! 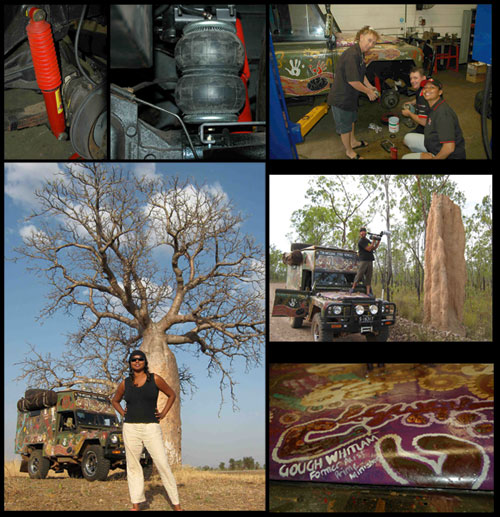