Ingall: I Didn’t Want to be a Co-Driver 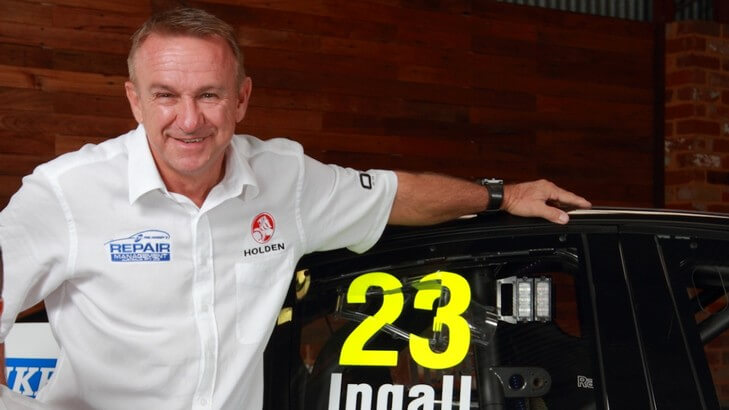 Will you support Ingall this year?

For Russell Ingall, helping build Lucas Dumbrell Motorsport is a more appealing challenge than suiting up as a co-driver.

Given his 2005 Championship win in a Ford, and two Bathurst wins in a Holden, Ingall has ticked plenty of boxes in V8 Supercars.

While ending his run as a full-time driver to pair with a successful team capable of a win at Mount Panorama – and throughout the PIRTEK Enduro Cup – was “absolutely” a consideration for the 49-year old for 2014, it just wasn’t one that sparkled.

“I’ve sort of fulfilled most of my ambitions in the sport.

“This is a different challenge… I think this is what attracted me more towards it.

“A couple of weeks after Homebush I sat down – and this was a family decision, (wife) Julia was obviously involved in this – and even she said to me, ‘You’re not going to be happy just doing the enduros are you?’.

“It was just not doing it for me, (the thought) I can’t wait to get back in a top-line car and have a good crack at winning Bathurst. It’s three events mind you, but Bathurst being the ultimate one, the spark wasn’t there.”

He saw a co-driver role as “do your five laps, sit in the back of the garage and wait for your turn”. In fact, the veteran went as far as to say he wasn’t sure whether he’d ever be interested in co-driving.

“It wasn’t exciting me and I’m not sure it ever will. When that bridge comes we’ll cross it.

“At the moment, I thought, if I’m going to do the enduros, why not – if the opportunity is serious – why not do (the year with LDM) instead?

“I wouldn’t be surprised if I get to the stage where if I’ve had enough I just pack it in altogether and do something else, not even do the enduros.

“Like I said, just doing the enduro races didn’t do much for me, I was struggling with that concept, to be honest.”

The more push-back he faced while being linked with LDM – which has been one of the lower performers in the field since debut in 2010 – the more Ingall questioned why people thought he couldn’t succeed. His experience and skill was in demand, and he feels this opportunity means he can give back to the sport he has enjoyed for the past 18 years.

“There’s a bit more to it than just driving the car – there’s more involvement. I’m putting a little bit back into the sport too,” the Enforcer said.

“The trouble is, everyone’s so readily in the sport and all they do is take, take, take – they don’t put anything back. I think not going with a top-line team, but keeping this team on the grid to start with, potentially helping it get back to two cars, that’s giving back in my opinion. So why not do it?”

There was a lot to consider, but ultimately the fit was right, with Ingall, Holden Motorsport’s support and Phil Munday coming on-board as major sponsor for the team with Repair Management.

“You get your experts (asking) is it going to be damaging to your brand you’ve built up – but what’s damaging? It’s a race team, we’re going racing.

“If I didn’t do this I’d probably be elsewhere, Porsche, a GT car, something like that – so why not this?

“If there’s the opportunity to race full-time, why wouldn’t I? But I’ve got to make it work. I realise it’s going to be a hell of a lot of work, but it depends whether you want to put in or not.

“A lot of the drivers don’t, they want everything handed to them, but I never worked that way. Everything I’ve got has been fought for, so it’s no different from my perspective.”

He added the team was well-prepared for the season, with the Triple Eight built car already complete and ready to hit the track at Sydney Motorsport Park for the sydney.com Test Day in just eight days.

“We’re pretty well ahead of the game here – this car as we see it, this isn’t a mock up. The guys tell me all we have to do is put oil in it and she’s ready to go to the test day. I bet a lot of other teams aren’t that far down the road. It’s been completely rebuilt, it’s virtually a new car, so we are ready to rock and roll.”

Ingall was the final full-time driver to be confirmed, with the full grid announced on Wednesday.

Fans can see the 25 V8 Supercars in action at the sydney.com V8 Supercars Test Day on February 15 at Sydney Motorsport Park, with admission free for the day. The cars will be on track for two sessions between 9am and 5pm, with a fan grid walk at 12.30pm.