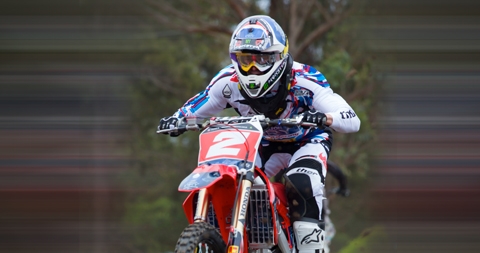 Carlton Dry Honda Thor Racing’s Gavin Faith has clinched the 2012 Pro Lites title with a commanding win at the final round of the Terex Australian Supercross Championships at Newcastle Showgrounds.

Faith, who won the 15 lap race ahead of Kade Mosig, dominated the series, winning three of the four rounds and finishing third in Toowoomba.

The American won the series with a tally of 95 points, just five points shy of the series maximum. “I just missed the title last year so this felt like it was a long time coming,” Faith said.

“While I wasn’t going to take any silly risks I definitely wanted to win tonights race to put an exclamation mark on the season.

“We had some great races this year and the competition was awesome. I really want to come back for next years series but right now I will head back to the US and to MTF to prepare for the East Coast Lites,” Faith concluded.

It was a disappointing finish for Honda Thor Racing teammate Hayden Mellross who went down in the whoops and despite a gallant effort, was only able to work his way up to sixth.

Mellross had led U’19’s Championship from the opening round but lost the title to eventual race winner Kale Makeham by just one point.

“It is gut wrenching,” Mellross admitted. “To lose the title like this is a bitter pill to swallow.

“I had a bad night all round, I went down in my heat race, got a bad gate pick for the final then crashed in the whoops. My bars and leavers were bent and I just couldn’t make up the positions I needed to.

“That’s racing it has been a steep learning curve and I am proud of what I achieved in my first year in the U’19’s,” Mellross said.

Pro Open campaigner Ben Townley didn’t close out the  2012 season the way he had hoped. The Carlton Dry Honda Thor rider, who utilised the series to work his way back to peak fitness following serious injury,  holeshot the final but dropped back through the order and eventually finished the race ninth.

Ending the season ninth, the former World Champion will head back to New Zealand to continue preparing for the 2013 season.