DYNAMIC, INNOVATIVE… AND NO BULL 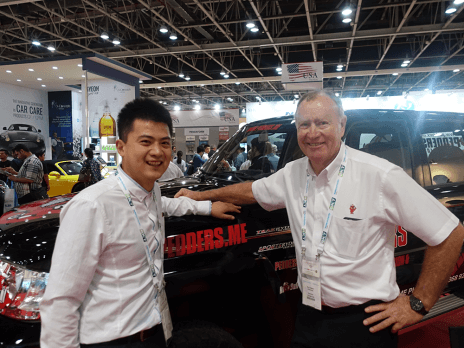 With an automotive aftermarket career spanning close to five decades, Mr Ron Pedder’s reputation as a genuine, honest, straight-shooter is acknowledged widely within the industry.

Mr Ron Pedder is an Australian automotive aftermarket icon. The chairman of Pedders Suspension has had a long and high achieving career in the Australian Automotive Aftermarket industry and is an early pioneer of Australian franchising, having established his first franchise agreements in the late 1970s.

An ex-RAAF World War II aeroplane welder, Roy began the business by fixing general household items, but with his skills in welding die-cast materials, found his niche in the automotive market in smash repairs and shock absorbers.

With the weakness of the early lever-type shocks in Australian conditions, coupled with the demand for his services in this area, Roy decided to specialise in the repair and reconditioning of shock absorbers and subsequently the business grew rapidly. The workshop was moved to a factory in Wren Road,Moorabbin, while sales continued in Malvern.

In the mid ‘50s Pedders became renowned for reconditioning shock absorbers that the rest of the trade said were unrepairable. By the late ‘50s Pedders had 15 people servicing more than 3000 shocks per month.

Pedders moved with demand and its reconditioning work gained wide acceptance. In 1964 Pedders was mass producing its own brand of shocks by simply modifying overseas designs to suit local needs. Soon the shocks took on the distinctive red colour for better identification, and by the end of the ‘60s, Pedders shock absorbers had grown in reputation and popularity.

In 1972, Roy’s eldest son Ron, took over the company and he was quick to demonstrate his innovative ways, for just two years later, he implemented the next significant step – utilising what the company had learnt from reconditioning other companies’ shocks, Pedders began designing its own.

To support this radical step, Ron saw the only way to ensure good distribution of his product was to open Pedders own stores, the first of which was opened in Adelaide in 1974.

Read the full story in our Pedders Feature article below.