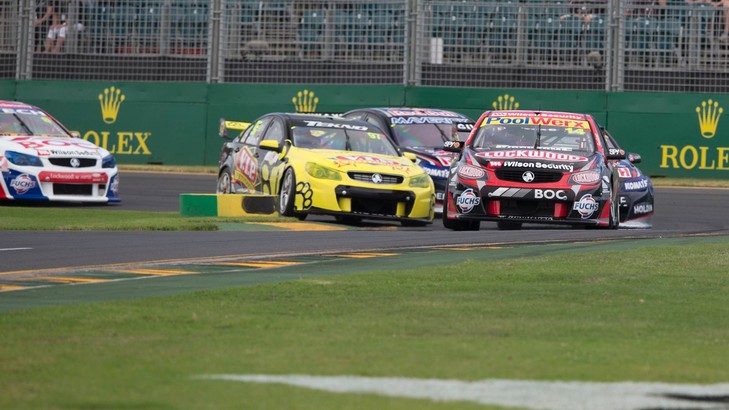 “It’s always great to race alongside Formula 1 and I’m really looking forward to seeing how Daniel Ricciardo goes this weekend in the Red Bull car.

“As for us, we obviously had a really positive weekend at Clipsal and we’re feeling really good coming into the Grand Prix. We all really enjoy Albert Park as a circuit, but the atmosphere is always awesome too – we’re lucky to get to be a part of it.

“This year I’m also the V8 ambassador for the event too, which has been great – it’s an honour to be representing V8 Supercars on the world stage.”

“I’m pretty excited about going back (to Albert Park). It’s a place I got my first pole, first race win and first round win too… It gave me awesome confidence for the rest of the year. The crowd is great too, I’m really looking forward to it.

“This weekend is important to check out what was going on (with qualifying). Was it a one off, or something else? We had such a fast race pace so it was strange. If we can get our normal qualifying mojo back we’ll be fine.”

“I’m really excited about the potential we had in the car at the Clipsal 500, as the days have passed from that event, you relive every moment of the weekend trying to understand how you could have gone better.

“For me it was those mistakes that caused me to get drive through penalties no doubt, and then at the end of the race I’ve relived every corner of how I could have gotten past Fabian (Coulthard).

“Being in that position and thinking through the processes, I think is a fantastic thing. This time last year we were in a very different position.

“Coming off the back of a pretty solid result at Clipsal, it’s so important for us to carry that momentum into the Grand Prix and out of the Grand Prix into Tasmania, so we’re putting a lot of effort into the GP to ensure that we can get a car that is quite speedy around there, because it’s a very different track to Clipsal.

“It’s so important to carry that momentum, to carry pace that is good enough for us to be up the front and to get results that are competitive at the front of the field.

“At the moment we are putting 100 per cent focus on that, and the Grand Prix is equally important as any other round we go to in ensuring we can carry that momentum.”

“The Grand Prix is a good event to rebuild our confidence and put in a performance worthy of our high standards. We had a hard start in Adelaide but I am confident we still have the car speed to win races and that is our aim this weekend at Albert Park. With four events in five weeks you need to bounce back strong as otherwise before you know we will be in Perth and a third of the season has gone.”

“Melbourne always has an awesome atmosphere around Grand Prix time. Albert Park is a great track to race on and we’ll definitely be fighting back after a difficult start to the season in Adelaide.

“Restarts are a big topic of conversation at the moment so all eyes will be on the double-file rolling starts this weekend. Saying that though, everyone predicted carnage before every rolling restart last year and most of the time it was fine. Like always it will pay to start up the front. I am not sure why the point system reflects that the last race is twice as important than any other with double points up for grabs but I suppose it means you need your best performance on the final day to go well. (ED: To reflect the double points on offer in the final Formula One race this season)

“If the F1 boys have a spare five minutes to have a chat I will certainly take it but the last thing I want to do is get in the way of their preparation for the season opener. The best thing they can do in Melbourne is to push hard on track and do us supporters proud!”

“I always enjoy the Grand Prix. It’s a great track and the atmosphere is cool, being there with Formula 1 guys and the big crowds.

“It’s a home event too, so it’s an added bonus getting to sleep in your own bed as opposed to a hotel.

“The rolling start element is not something new to us, having done them last year with the 60/60 formats, but clearly it’s new for the Grand Prix and I think it will add some excitement for the fans as we all bomb into Turn 1 three or four wide.

“We need to be on top of the restarts. Ideally, we need to qualify well and be up the front of the field, which will reduce the chance of being involved in the mess. The aim for the weekend is to get some strong results, but most importantly, come out of the weekend with a straight Norton Hornet. It’s a tight turn around to the next event at Symmoms Plains, so we don’t want any unnecessary damage.

“We’ll be going hard at the GP. We had a couple of good results last year, which wasn’t really expected, so in many ways, we want to go back there and perform to those standards, if not better.”

“The Grand Prix is always a great event and one that we look forward to each year… We’ll be going there and trying to get the best results possible. There’s  a lot to learn from the circuit which will come in handy for us in the remaining events.

“It’s still early days for Nissan Motorsport and its new aero package, so we need to bank as much data as we can before we get into the next few events.

“Our cars were quite strong at Albert Park last year. We were involved in an early incident that put us on the back foot, so given the improved aero package, plus a season of development, I’m hoping that we roll out of the gate very strong.”

“Like the recent Adelaide race there has been changes to the format and it should be interesting how these will compare. We don’t want to see the carnage that we saw at the Clipsal race, especially in the restarts. Tearing up equipment at these races isn’t the smartest idea but tell that to a driver when the red mist descends…

“This weekend’s format should definitely work in my favour. It’s about time we got back to a system that rewards you each race and something that should be considered in the regular Championship. I’ts not so qualifying orientated and will show the true racers.”

“We are going to Albert Park with the main aim of improving the car… I love the Grand Prix and enjoy seeing the Formula 1 Championship kick-off and getting up close to all the new cars, liveries and drivers. The world is watching our backyard which is pretty cool.”

“The Grand Prix event is really good for us as we can focus on going as fast as we can… We were disappointed with our overall pace at Clipsal so we are looking to try and improve this weekend and look for more consistent speed from our Team JELD-WEN Ford. The rolling starts are a bit NASCAR-esque so that should be interesting and provide some good entertainment for the fans. The start format will also make qualifying more critical as usually you can make up ground if you qualify poorly on a standing start but that wont be the case this weekend. If we can qualify well we should have a good weekend.”

“The Grand Prix is always one of my favourite weekends of the year.

“The whole atmosphere at the event I reckon would be in my top-three tracks we race on.

“I’ve had a little bit of success over the years at that place, and it was a really good run for us last year.

“It was only our second event with the all-new Nissan Altima, and we had quite a strong weekend.

“So we’ve made a lot of quite significant improvements since this time last year, and we’re really looking forward to getting on the track and seeing how we go with the cars in 2014 spec.

“I’m quietly positive that it will be a pretty solid weekend for us.”

“It’s the first time I will be racing at Albert Park since 2010 in Formula Ford. It was my favourite track in that style of car so I am pretty keen to race on such an iconic track. I am running the spare chassis this weekend so my primary car can be repaired after the big shunt at Clipsal. The specification is the same, so this weekend is a great chance for me to continue to understand the team and the car a bit better.”

“I learnt a lot at the Clipsal and am really looking forward to getting the Coates Hire Racing V8 Supercar onto the GP track.

“Although it’s another street track like Clipsal, its layout is more like a traditional race track and requires a very different set up… Nobody will be holding back. It is going to be very exciting.”