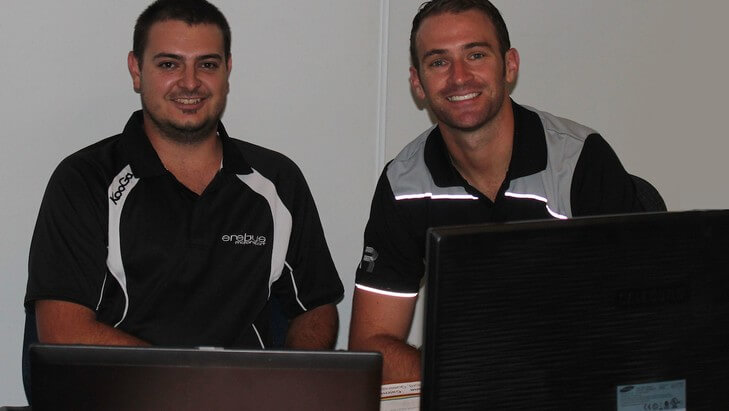 Erebus Motorsport V8 new recruit Will Davison is gearing up for the 2014 season, having spent time with new engineer Luke Mason in the Yatala workshop earlier this month.

West Australian Mason, who began as a data engineer with the team in 2012, will step up to run Davison’s Mercedes-Benz E63 AMG for the season, in what the team hopes will prove a strong pairing.

“With Will coming to the team, we felt it was a good time to start a relationship that could grow over the years of Will’s contract with Erebus,” team manager David Stuart told v8supercars.com.au.

“Luke Mason was a data engineer within the team and has been working with Wes (McDougall, who has moved to a management role) over the last two seasons on Tim Slade’s car and is a good young guy.

“It’s a good opportunity for him to move into that role and build that relationship as well – hopefully it’s a successful relationship.”

Stuart said the understanding between driver and engineer was critical to success.

“The driver-race engineer is one of the most important relationships you can have when you’re going racing.

“It is really important that the two of them can speak the same language, as much as the engineer asking the driver the right questions, and the driver being able to provide an answer that is clear for both of them to understand, and mine through the data and make the right changes to the car…

The change obviously meant a reduction in staff and a reshuffle within the organisation.

Brad Wischusen will remain as race engineer for Lee Holdsworth on the sister Merc, as Tim Slade’s former engineer Wes McDougall moves up to an engineering management role. Richard Harris has joined Erebus Motorsport V8 as data engineer, having performed the role in Australia and overseas, and the team is still looking to fill another data position.

Snap-on Tools on Tuesday joined the list of sponsors for the team, though there are still gaps to be filled ahead of season start.

“Our relationship with Erebus runs deep, so of course we’re delighted with the opportunity to support their new V8 Supercar program,” said Steve Jones, Snap-on Tools Australia and New Zealand National Sales and Marketing Manager. “At Snap-on we know and value quality performance, so it is no surprise we align ourselves closely with Erebus Motorsport’s Mercedes-Benz AMGs.

“V8 Supercars is the premier division of motorsport in this part of the world. Our customers, as well as our franchisees, are hugely committed to the sport. So we’re excited to be able to continue to invest in a sport which everyone across our business feels passionate about.”

Snap-On branding will be seen on the sides of the rear bumpers of both Erebus Mercedes-Benz E63 AMG V8 Supercars.

Davison’s move to a new team means four of the top five Championship finishers for 2013 all head into this V8 Supercars season with new engineers supporting them.

The only heavyweight to continue its current pairing is Craig Lowndes and Jeromy Moore, though Moore will also take on the role of design chief away from the racetrack as announced recently by Red Bull Racing Australia.

James Small, who worked with Mark Winterbottom and was highly regarded as one of pit lane’s best, has taken a dream position with NASCAR and jetted off overseas late last year.

Ford Performance Racing’s engineering line-up is yet to be confirmed, with Chaz Mostert stepping in to the team to replace Davison.

The V8 Supercars will first run on track on February 15 at the Sydney.com Test Day.