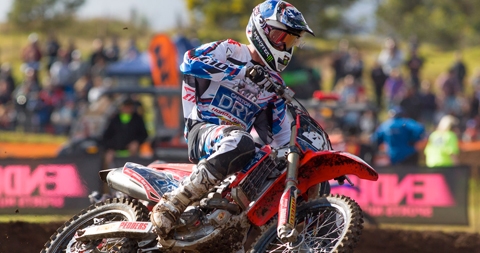 Carlton Dry Honda Thor Racing’s Pro Open riders Ford Dale and Ben Townley returned to the racetrack on the weekend for extra preparation ahead of the second round of the Australian Supercross Championships at the 2012 Air Asia Australian Motorcycle Grand Prix on 26-27 October.

The duo, who were both non-finishers after early crashes took their toll in Dubbo, crossed continents to gain extra race miles and maintain momentum between events.

Dale contested the final round of the MFJ Japanese Motocross Championship while Townley returned home to New Zealand for the Labour Weekend Motocross Extravaganz in Taupo.

Dale won both MX2 races on his way to claiming the final round of the MFJ Japanese Motocross Championship. The event provided a great opportunity for the Honda Australia rider gain recognition in Japan.

“I had a great time competing in the Japanese Motocross Championship,” Dale said. “Everyone was really supportive and it was awesome to work alongside Honda in Japan.

“It also gave me an opportunity to see the CRF450R put through its paces and after witnessing it in action, I am really excited about what next year holds.

“This event also gave me the chance to get some more race miles under my belt before we head to Phillip Island,” Dale added.

Teammate Townley was also back on the winners dais, taking victory in all three races at the Labour Weekend Motocross Extravaganza.

The former World Motocross Champion said the event gave him the chance to go out and focus on his riding.

“I had a really good day it was great to be back racing again,” Townley said. “The Dubbo Supercross event was the first race I had done since April so I was really keen to get some more racing in before Phillip Island.

“My riding is building back up, but physically, I still have a long way to go.

“Each weekend I want to improve, I have Phillip Island this weekend then another five weekends in a row of racing which is really important in terms of preparing for next year,” Townley added.

Tony Hinton from Honda Motorcycles said Honda enjoyed a successful weekend in both off road and road racing.

“The all new CRF450R won the Open Championship in Japan and also won on debut in America in the Monster Energy Cup,” Hinton said.

“That coupled with Ford Dale’s success, Ben Townley’s win in New Zealand and Danny Pedrosa’s win in Sepang made for a very successful weekend for Honda.

“I hope we can carry it through to the coming weekend at Phillip Island.

Both Carlton Dry Honda Thor Racing riders will return to Australia for the second round of the Australian Supercross Championships
at the 2012 AirAsia Australian Motorcycle Grand Prix at Phillip Island this weekend.