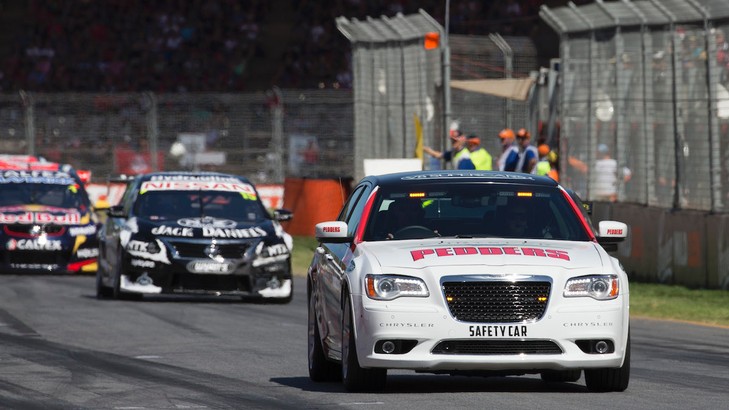 The V8 Supercars Commission has made four key changes to the Pedders Chrysler Safety Car restart procedure for all V8 Supercar events, to come into effect from next week’s Tyrepower Tasmania Challenge.

The restart procedure has been modified based on lengthy consideration by the Commission and feedback from key stakeholders, including drivers, to simplify the procedure.

The primary objective was to simplify the system, as well as only introduce methods that can be genuinely monitored.

–        The lead driver will determine the restart; no green flag from the starters box.

The procedure has been modified following the Clipsal 500 Adelaide.

The Commission agreed that a higher speed limit would better place drivers to prepare for the restart and offer a larger speed variance to avoid exceeding the speed limit.

Using the control line as a determination point would ensure that cars did not unfairly overlap prior to restart and the AZ zone lengthened, to be determined circuit by circuit, allowing for more strategy at the restart.

The green flag will no longer be waved from the starters’ box which may cause confusion amongst the field and give control back to the race leader, as has previously been the case, to restart the field.

The Commission also considered a double file restart but deemed that because circuits cannot be swept or cleaned during a safety car this would disadvantage drivers on a particular side of the track.