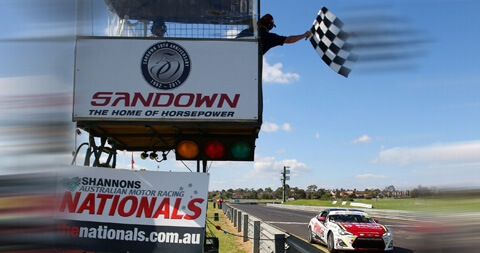 Bendigo’s own, Pedders Racing, has this weekend completed an almost dream end to what has been a challenging season, one filled with promise, development, many world first achievements for the Toyota 86, and now, a Class D Championship victory in the Australian Manufacturers Championship. Having commenced the enthusiastic project to become the world’s first successful production racing Toyota 86 more than four years ago, the local volunteer team has committed countless hours to plan, build, manage and operate the unfolding project, greeting every challenge with determination, both on and off the track.

2013’s Australian Manufacturers Championship saw the place for the national racing debut of the #86 Toyota GTS, with the state racing on track debut at Mount Panorama Bathurst having already shown great opportunity for success, and confirmed the team’s cohesion to make the Pedders Racing year a strong one. With season highlights including the pride of their debut of the world’s first production racing model of Toyota’s hyped sports car, class pole positions, a class race win, guest drivers including Toyota legend Neal Bates, film and television star Shane Jacobson, along with TRD Malaysia endurance specialist Chris O’Shannessy, the AMChamps Class D Championship honours closed the year on a high.

The final round unfolded alongside the Shannons Nationals at Sandown Raceway, with Andrew Turpie and the team confident after Friday’s practice session had the times on target and the 86 on song, going on to see both Grant Phillips and Turpie putting in the fast times, before Turpie took the Pedders Racing 86 to its second consecutive class pole position, placing the team spirit in high hopes for what lay ahead with one hand already on the trophy of the class championship going into the final three hours of racing.

Race day Sunday came with a concerning start, a coil pack coding issue in morning warm up requiring frantic work to keep the Pedders Racing 86 at its best, the fix proving unsuccessful as Turpie took the seat for race start, soon realising the #86 entry was lacking power but the persistence to be consistent had Turpie holding strong in the class lead with more than half a minute back to the class competition, and placed inside the outright top ten as the minutes ticked on Pushing hard, the challenge was still on, the 86 continuing its outstanding braking to hold strong against higher classified entries through the turns, enjoying side by side action before the traction control warning lights appeared and the 86 began to lose further power so with his stint complete, Turpie pitted to hand the struggling 86 to Phillips as the pair completed the driver change with a full system reset and refuel before returning to the race.

For Phillips, it was a sinking feeling as the Pedders Racing Toyota was soon more than 20 kilometres an hour slower than expected race pace, dropping into a class second, still holding on with eighth outright, but hopes of a class race win were fading fast. Never the less, the team spirit to never give in continued on, while the 86 continued to slow, Philllips drove it home to the flag to take second place in class, the consistency of the season and the final race finish enough to secure the Class D Championship, completing a string of three-in-a-row class titles for Pedders Racing, while making the team’s mark in Toyota’s motor sport history even stronger as Turpie explained, “What a typical motor sport weekend – stress and success!

“It’s been such a big year for our little team, so to come away with the Class Championship in our debut season with the 86 just shows the level of commitment that everyone has put into the project, and if there’s any way to say thank you for the crew and sponsors, a title is a pretty good option.

“The car has had its faultless moments, but in the racing game there’s always something to learn, or a new glitch, and we’re proud that each time we step further forward and keep trying. “We’ve achieved many world firsts with this car now, and this is certainly one of the stand outs for my racing career.”

Being used to being able to take the 86 to its limits, but having had to limp home in the final race of the season, Phillips acknowledged the bittersweet moments of crossing the finish line for the race and the AMChamps season, saying, “It’s hard to believe that this has all happened. We’ve had years of planning and building this 86, and now already the season is coming to an end with the bittersweet feeling of promise turning into under-performance this weekend, but with the excitement and pride that all of the team’s efforts this season have given us the championship, and in the first year of such a forefront project, that’s a massive achievement. “We’ve seen so many sides to the racing story with our dual-championships in the Pedders Racing Proton, and now to take on the 86 opportunity, learn so much, and really make our mark with the support of so many significant and enthusiastic sponsor partners, it’s almost unbelievable that this is the end of the season.

“All involved with the Pedders Racing Toyota 86 project can be incredibly proud of what we have achieved together. For Turps (Andrew Turpie) and I, to race this car at these circuits with this team is a dream come true and there’s no doubt we’re all going to be looking ahead to 2014 with great hope.”