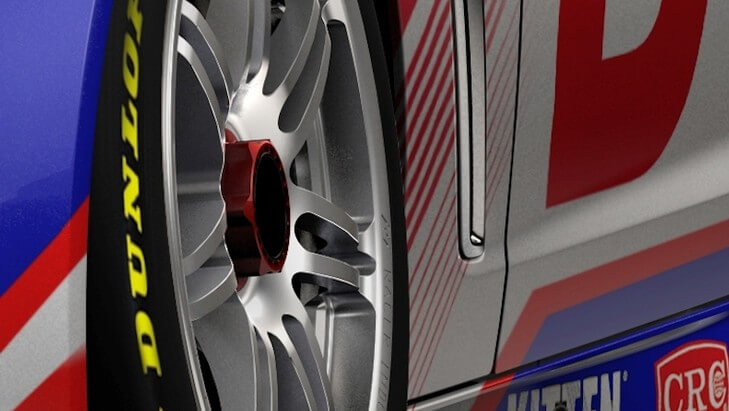 Team BOC is the next to release a teaser of its 2014 livery, an artist’s impression showing a piece of Jason Bright’s Commodore’s new skin.

Bright – who finished the Championship in seventh place behind Lockwood teammate Fabian Coulthard in 2013 – is happy with the new look.

“There’s a bit more colour on it,” Bright told v8supercars.com.au of his Holden VF.

“In 2011 we obviously had a red car, the last couple of years it’s been predominantly white and this year it has changed again. I thought it was pretty good!”

The team has revealed an image of the vinyl wrap being prepared for the transporter on Facebook, which gives an indication there may be some more blue on the #8.

Our good friends at Rice Graphics getting the vinyl wrap ready for the team transporter update..

Bright first saw the livery at the end of last year – a sign of continuity within the small team. Some teams are still to confirm the absolute final look of the cars because there were still commercial holes to be filled.

“It’s very important,” Bright said of the continuity with BOC as a major sponsor.

“I think BJR does a great job of looking after their sponsors and we have a really good sponsor portfolio and a good relationship with them.

“The relationship, the deal we’ve had with BOC, is probably one of the longest we’ve had in V8 Supercars…

“There’s great stability at the moment. On the driver front, sponsor front, personnel front – that’s a massive win in this game.”

It’s been an exciting off-season for Bright, who married long-time partner Lucy Peacock – a familiar face to many in pit lane – in Malta. With one-year old son Lennox, they then traveled to Switzerland to hit the ski slopes. Bright declared it was one of the best breaks he’s ever had and is rejuvenated to go back racing, particularly after BJR’s strong results in 2013.

“I enjoyed my off-season… it was certainly one of the best off-seasons I’ve had.

“From now on we’ll be pretty busy – I’m doing the Bathurst 12-hour this week and the weekend after is the V8 Supercars Test Day, so it’s about to get busy again!”

Brad Jones Racing is gearing up to release both the Team BOC and Lockwood liveries, after new recruit Dale Wood’s ADVAM colours were released last week.

The team tweeted a teaser of Coulthard’s Commodore in January.

The V8 Supercars will hit the track at Sydney Motorsport Park on February 15 for the Sydney.com Test Day, free for spectators.

The first race weekend is the Clipsal 500, from February 27 to March 2 in Adelaide – tickets are available now.