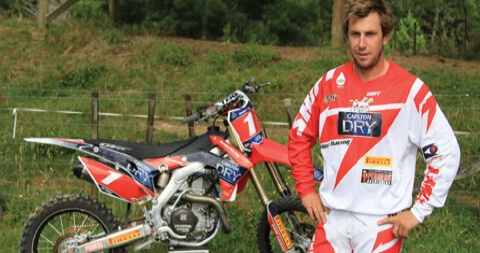 Townley’s remarkable journey saw him leave his home country of New Zealand to take on the world at just 16 years of age. He spent five years in Europe and after claiming the MX2 world title in 2004, he finished third in the coveted MX1 World Championship the following year.

In 2007 he moved on to America to take on the best Supercross racers in the world and in a clear display of discipline and dedication, he won the Supercross Lites East Coast title in his first year of AMA competition.

While Townley will retire from full time racing he will continue to work with the Carlton Dry Honda Team.

“This decision hasn’t come easy,” Townley said. “I am yet to finish a full season in five years due to injuries and unfortunately they have taken their toll. I love racing, it has been my life for 22 years however I have a wife and two beautiful young sons to consider.

“While I am retiring from full-time competition, I will still ride and race at selected events. My reputation and integrity are of the utmost importance to my family and I. I told my team that I can’t deliver the championships I promised them injured, and after this last fall I realised I needed to take time off to fully recover.

“Although I am retiring from full time competition I am not walking away from the sport. I love motocross and understand and accept that we can get injured. I am only 28 and I believe I have a lot I can give the team and the sport.

“I will remain with Carlton Dry Honda Racing and will be working closely with the team’s riders in an effort to deliver them a championship. I might not be twisting the throttle personally, however I believe I can aide in other ways,” Townley concluded.

Supportive of Townley’s decision Tony Hinton from Honda Motorcycles wished him well for the future.

“Obviously the timing of this announcement is not ideal,” Hinton said. “However Honda has complete respect and understanding for Ben’s decision.

“Of course Ben’s priority must be his health and the well being of his family at this time and Honda wishes him all the best for the coming months.”

Carlton Dry Honda Racing team owner Yarrive Konsky, a former racer who has dealt with many injuries, understands all too well the impact they can have.

“Ben is a remarkable rider, a caring husband and father,” Konsky said. “The effort he puts into his racing is outstanding and his input in the team’s structure over the past year has made a huge difference. In fact since he joined the team we have won two championships.

“Ben will continue to remain involved with the team, he is not quitting the sport, he is not leaving the team and he is not turning his back on his fans or sponsors.

“Motocross is full of life lessons. It can teach you about failure, joy, disappointment, excitement, winning and losing as well as about maturity, teamwork, humility and selflessness. Nowhere is that more evident than in what I have experienced with Ben Townley,” Konsky added.